Home Culture #LLF2016 Day One, In Your Words 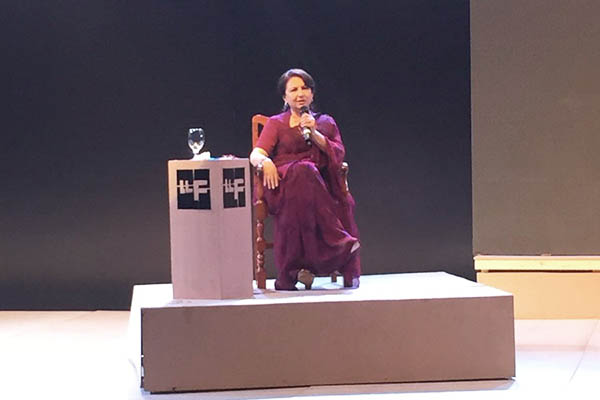 A truncated schedule and last-minute venue shift wasn’t enough to deter the thousands that flocked to Avari Hotel in Lahore for fourth annual Lahore Literary Festival on Saturday.

I can't say how delighted I'm to be in #Lahore, thanks to #LLF2016 says Sharmila Taigor @lhrlitfest

Sharmila Tagore talked about countering stereotypes of #women in her films and her joy at visiting #Pakistan #LLF pic.twitter.com/baLYA5WimE

Gorgeous day and here we are at Whose Narrative Is It Anyway with Susan Abulhawa, Tanya James and Mohammed Hanif among others #LLF2016

"Whose Narrative Is It Anyway?" I'm here for @taniajam! #LLF2016 pic.twitter.com/cWMKanm6K9

#LLF2016 starts with @salmanAraja , I A Rahman, Khalid Ahmad & Farzana Shaikh with a talk on 'Mazar & Maddrassah' pic.twitter.com/5v8A2WiBxJ

so #LLF2016 kicks off with Mohamed Hanif riffing on the "security threat" we've been told about. Delighted audience pic.twitter.com/bKtWz1kDVv

#LLF2016 cancelled Friday, moved bc "Finest govt in #Pakistan can only offer security on Sat, Sunday, at a 5 star hotel." @mohammedhanif

There should be a memorial of Intizar sahab in Lahore, as the city is incomplete without him- Asif Farrukhi at #LLF

Zukiswa Wanner: I've met people who say "I don't read" – I like to entertain them with my novels so they read another #LLF2016

#Day1: Jinnah was the first to realise the problems Pakistan was going to face if it stuck to its Islamic identity- I.A.Rehman at #LLF2016

Behind the scenes: Prepping for their session. @kamilashamsie #LLF2016 pic.twitter.com/6LMVK7jV9M

Since I track down & collect old Pakistani magazines, this sessions is like my holy grail. Beginning in 5! #LLF2016 pic.twitter.com/3DPf8flKbZ

#LLF2016 is off to a rocking start! Kudos to the @LhrLitfest organisers for showing grit in extremely difficult circumstances.

Arfa Zehra: Qawwali about forgetting yourself and finding yourself in the same moment. (She said it much more eloquently in Urdu) #LLF2016

Kudos to the #LLF team for putting on a great show. Enjoyed participating in session Contemporary Great Games

Steve Coll:"LLF is the best example of Pak's resilience.Fest was shifted,days were cut,schedule was truncated but here we are" #LLF2016

Mona Elthaway along with Rachael Hommes,Anita are conducting this amazing session of #Feminism and #GlobalPolitics #LLF #2016 #Lahore

Arfa Zehra: Qawwali about forgetting yourself and finding yourself in the same moment. (She said it much more eloquently in Urdu) #LLF2016

This British Council pop up library is the cutest thing I've seen at #LLF2016 (and they have free lemonade) pic.twitter.com/FdHz6IaUUM

Mohammed Hanif remembers Sabeen, discussing the wars we are living through right now in #Pakistan. #LLF2016

At The Arab Spring: A Frank Obituary with Susan Abulhawa, Mona Eltahawy, Texas Deghati and more. They feel an obituary is premature #LLF2016

Ahdaf Soueif: Who does the city belong to? The people who live in it or the state? There is that conflict going on in Lahore too. #LLF2016

EU Amb to Pak: "I wondered why I should support this fest, & now that I'm here, I understand why" @lahorelitfest @Europarl_EN #LLF2016 #EU

Every man should call himself a feminist. It means you are fighting for a just world: Anita Anand. #LLF2016

At Satire as Self-Defence with Rachel Holmes, Mohammed Hanif and Ned Beauman #LLF2016

Shuja Nawaz: the film Groundhog Day would be a very apt description of the relationship between the US and Pakistan. #LLF2016

At the Friends Not Masters? Session #LLF2016 @sherryrehman @VicePresPPPP pic.twitter.com/8io8LRCFMR

Sherry Rehman: the US averting it's gaze a bit won't hurt Pakistan. #LLF2016

The PakUS relationship is bogged down with intense emotion, high value targets & too much misdirected cash #LLF2016 pic.twitter.com/cuDlr9YQ0u

The venue was literally jam-packed with listeners. It was Zia Mohyeddin! #LLF2016 pic.twitter.com/spgIDnSsk1

Became an instant fan of @monaeltahawy after her session on feminism! Dedication in her cause pours out in each word she speaks. #LLF2016

So an overwhelmingly amazing day 1 of #LLF2016 comes to a close.
Geared up for another exciting day tomorrow.
Hats off to team @lhrlitfest