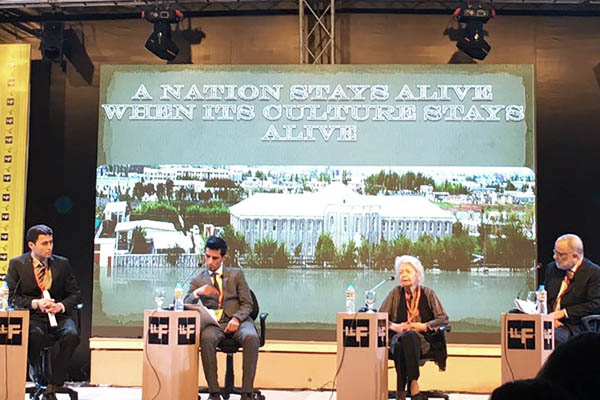 A satisfying end to the two-day Lahore Literary Festival.

Sunday morning at #LLF kicks off with a chat with Ahmed Rashid about #FATA and #Afghanistan #LLF2016 #LLF #Pakistan pic.twitter.com/Gp6YBJefYi

Nancy Dupree: In May 1993 there was a rocket that hit the Kabul Museum. So much was destroyed and looted. #LLF2016 pic.twitter.com/pzEI5csVU2

Nancy Dupree: Unfortunately my Kabul Museum guidebook became a shopping catalogue for collectors and looters after the rocket hit. #LLF2016

Writing and art creates empathy, and justice without empathy is no justice really: Mohsin Hamid at #LLF2016 Day 2 live

We have seen the deterioration of society in terms of freedom of expression: Asma Jahangir at #LLF2016 Day 2

Vast number of people at Literature & the Shackles of Politics with Mohsin Hamid & Susan Abulhawa at 10am on a Sunday! #LLF2016

Literature and the Shackles for politics. #LLF2016 pic.twitter.com/iOPXz1B2Ur

The female oriented panel on love literature! Sometimes it's good to have the gender imbalance in our favor #llf2016 #literature

Listening to David Bowie at the #LLF2016 pic.twitter.com/A6IIdudV5v

Coming across so many fantastic authors at #LLF2016; next few months will be spent reading all the books they're talking about.

David Bowie was also political; he once asked Mtv when it started out, why they weren't playing black artists: Fifi Haroon at #LLF2016 Day 2

So impressed with the enthusiasm of the incredible audience of Punjab, hats off to entire LLF team for organizing a successful #LLF2016

Madhur Jaffrey: I was asked to write a cookbook on Indian food. I thought I would write it in 3 months. It took me 5 years. #LLF2016

Jaffery's session is a reflection of how food can be much more than a necessity. It's art, personalized creation, intimate affair #LLF2016

Pakistani society is all about love; it has shrines thousands of years old: Mohsin Hamid at session The American Dream in the Arts #LLF2016

I would have given an arm and a leg to work with Dilip Kumar: Madhur Jaffrey at #LLF2016 session 'Revisiting
Shakespeare Wallah'

Enjoying a lovely afternoon at #LLF2016: an awesome talk and so many things to think about… Somehow it all revolves around #identity!

"It's not a small world. It's a small class." Jacqueline Novogratz @jnovogratz in #Lahore on rich poor divide in #Pakistan #LLF2016

Adrian A. Husain narrated an excerpt from the novel, "To the Lighthouse" by Virginia Woolf. #LLF2016 pic.twitter.com/WJ225FVwNz

Hats off to team #LLF2016. Congratulations on a great effort in difficult circumstances. As a Lahori, I thank you all.

Eagerly anticipating the Qawwali which will wrap up a great #LLF2016