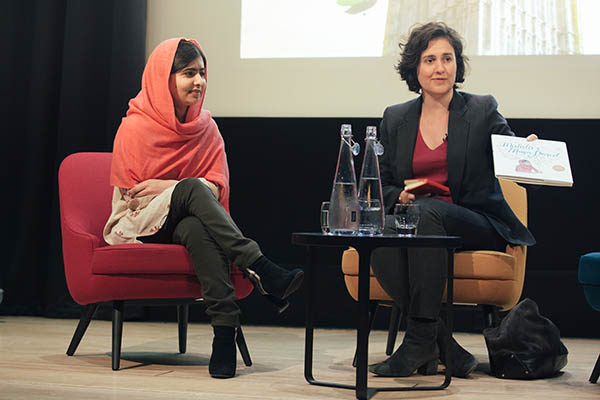 The Lahore Literary Festival returned to London for a second consecutive year, with a one-day event on Oct. 28 that featured the best of Pakistan, including the world’s youngest Nobel Laureate, Malala Yousafzai.

Come Londoners and see who is attending #LLF2017London? Some big celebrities including #Nobel laureates… marvelous work by #LLF team.

The first visitors at our DWL stall
at #LLF2017London. Come find us! pic.twitter.com/fpvGqJ9Uqg

"There were immense connections – need to look at Lahore in a different way." Ian Talbot speaking on pre-Partition Lahore #LLF2017London pic.twitter.com/EPutCq5zG9

'Lahore was the main center of education for the whole of North India, not just Punjab' – Ian Talbot #LLF2017London

'Partition, whether we like it or not, was a blow to culture in Lahore' #LLF2017London

Looks as if @raziaiqbal @MirzaWaheed, @tahmima are rehearsing for a play but really we’re prepping for the #LLF2017London Partition panel pic.twitter.com/LR8LdWPlyl

Gutted to miss #LLF2017London. Went last year and it was brilliant @lhrlitfest Hope everyone who can make it has a great day @britishlibrary

A frisson of excitement is sweeping through a long queue here at #LLF2017London to see @Malala interviewed by @kamilashamsie shortly. https://t.co/1dhqIEBXgJ

'Education is more than reading & writing; it's the empowerment of women' #Malala @lhrlitfest #LLF2017London

'There's a diff b/w leavin ur country by choice and by circumstances,I miss everything about my country. Everything' #Malala #LLF2017London

‘Winning the Nobel Prize didnt help me in becoming the Head Girl at School’ #Malala #LLF2017London
????

‘I’ve signed up for Cricket at Oxford.. i think I’m an all rounder though my brother thinks otherwise’ #Malala #LLF2017London

At #LLF2017London & bumped into one of Lahore’s coolest chics there-Salima Hashmi. Yes, she is a whizz at selfies. Yes, I felt privileged. pic.twitter.com/vG7zVzAT0S

"It is about the unlimited demand for handmade quality around the world" Prof. Ashoke Chatterjee #LLF2017London pic.twitter.com/2rYE47Q3h2