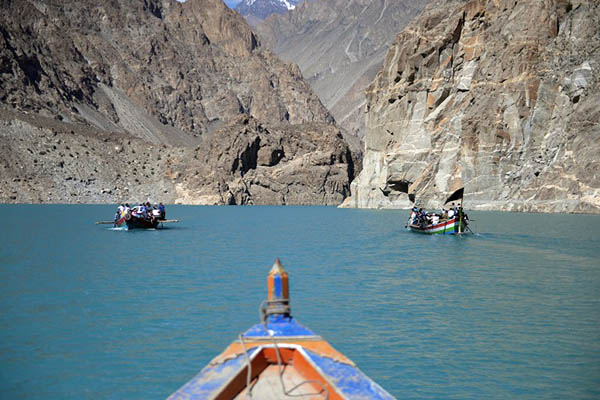 After a slump in foreign visitors triggered by a deadly attack last year, a new wave of local sightseers has saved tourism in Pakistan’s idyllic Hunza Valley—but not everyone is happy.

Though there are no official figures, hotel owners say large numbers of domestic tourists are visiting in unprecedented numbers, heading north to escape the sizzling heat of summer that lasts well into October. In Hunza’s main town of Karimabad, they snap pictures at the ancient Baltit Fort, a resplendent 1st century redoubt from where they can take in breathtaking views of lush forests and snow-capped peaks that have attracted the best climbers from around the world.

International tourism once helped shape the Gilgit-Baltistan region but it has slowed to a trickle after the killing of 10 foreign climbers at the base camp of Nanga Parbat mountain last year ended a post 9/11 revival. In their place have come visitors from Punjab, and Karachi, thanks mainly to a well-publicized TV campaign.

Though their business is both welcome and vital, cultural differences also highlight the growing gap between the religiously conservative south and traditionally secular north, according to observers. Some complain the local guests can be disrespectful toward the liberal traditions that have long set the area apart from the rest of the country, and are prone to spoiling the region’s natural beauty by littering. Others say they don’t spend as much as foreign tourists.

“This year there are no foreigners, only Pakistanis and the Pakistanis don’t buy things from here as they don’t need it,” said Saddar Karim, who owns a forlorn-looking trekking shop, adding Pakistanis usually aren’t interested in climbing.

Bewitched by the region’s splendor, as well as the famed hospitality of its mainly Ismaili Muslim inhabitants, foreign visitors in the late 20th century helped create around a dozen schools and have invested heavily in hundreds of others that dot the villages of the countryside. One such is Hasegawa Memorial Public School established in 1995 to commemorate renowned Japanese mountaineer Tuseno Hasegawa who is buried in the lap of the mountain, as per his will.

Schools like Hasegawa introduced English as the medium of instruction and played a major role in boosting the region, say locals. “International tourism has made a tremendous contribution in the socio-economic uplift of Hunza and we should be thankful for that,” said Imtiaz Ali, owner of Hunza Holidays, a leading tour operator. “After visiting Hunza they would return to serve as volunteer teachers in schools or carry out other philanthropy,” he continued.

International tourism took a major hit after Pakistan joined hands with the U.S. in its war against terror after 9/11, with would-be visitors conflating the country’s militancy-wracked northwest with its relatively peaceful far north.

Sherbaz Kaleem, manager of the ancient Baltit Fort, said that during peak season before 2001, “we used to receive almost 200-300 international community tourists” daily. The numbers were reduced to a trickle, but began to pick up once again later that decade.

The slow recovery came to a screeching halt last June, when gunmen shot dead 10 foreign tourists at the base camp of Nanga Parbat—giving new meaning to its “Killer Mountain” nickname among climbers. It was the deadliest assault on foreigners in Pakistan for a decade.

Kaleem said many people cancelled visits to Hunza while those at Baltit Fort reduced to two to three daily. “Even then they were afraid and many people told them that they should go back,” he added.

Ali of Hunza Holidays said the industry was now reorienting itself to focus on the local market. “I think it’s time now that we should focus on domestic tourism as unlike international tourism it is more viable and is not very much affected by the political and security situation,” he said. “It can help to create bridges of understanding between the various cultures of Pakistan,” he added.

Others are less enamored of their new guests. “The domestic tourists spread a lot of pollution in the area, they throw the trash everywhere,” grumbled Ahmed Ali Khan, a guesthouse owner.

In Karimabad, AFP spotted a small boy carrying chocolate wrappers in his hand follow a group of young domestic tourists and stop them politely, hand over the litter and ask them to bin it. Residents also complained that their cultural values, including their traditionally open and tolerant Ismaili Islam, were under siege.

Aziz Ali Dad, a social commentator, said: “The difference between domestic and international tourists is that the international tourists are more conscious about the local values and respect them, which is not the case with the domestic tourists.” Some of these Pakistani tourists “assert their identity so they preach the standard Wahabi Islam commonly practiced in the south and this creates the danger of a religious rift because they don’t value the local religious and cultural rituals,” he adds.

Finishing a guided tour around Baltit Fort recently, manager Kaleem asked the group of students from Punjab whether they had any questions. One of them noted that locals enjoy locally made apricot wines and mulberry spirits and did not appear to pray regularly, then asked: “Why don’t you behave like a good Muslims?” Kaleem brushed away the question with a smile, and went to another group waiting for their turn.