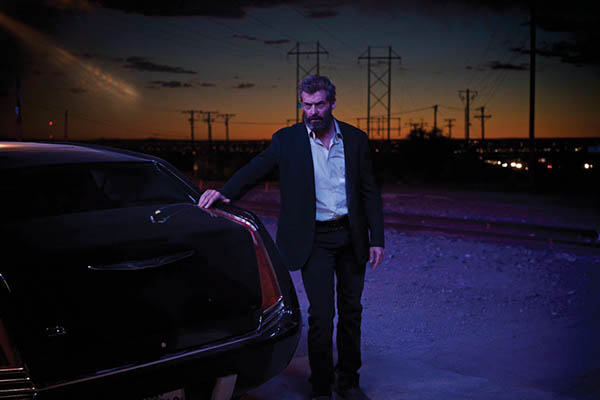 The X-Men universe just got darker.

Life is unfair. We all learn this early on. The bratty neighbor has better toys. The classmate who never studies gets the better grades. The evil organization that cloned us will try to eventually wipe us out. Yes, life is unfair.

That sense of despair suffuses Logan—likely the last X-Men movie featuring Hugh Jackman, 48, as Wolverine—which desperately wants to convey the brutality and unpredictability of life, often ham-handedly, even with mutant abilities. There are worthy performances from the leads and some stellar directing (James Mangold) and cinematography (John Mathieson), but Logan tries too hard: it is overeager to play its serial close-ups into high-message art.

This is the 10th X-Men movie in 17 years—each one has featured Jackman as Wolverine. In the world of superhero sagas, these mutants are royalty, even if they have been eclipsed at the global box office by the hipper, nimbler Avengers. Each X-Men movie has been a hit, thanks in no small part to Jackman, who really sank his claws into the character and defined the wry Wolverine for an entire generation. (It’s unthinkable that Bryan Singer, director of the first X-Men picture, almost didn’t cast Jackman.) Logan is the third solo outing for Jackman as the indestructible tortured soul, and he’s in virtually every frame of this 2 hour 17 minute story.

Set in 2029, the aged Wolverine is a man left broken and disenchanted by an unrecognizable world, living with the ghosts of the gloried and gory past. Prof. Charles Xavier (Patrick Stewart), now in his 90s, isn’t faring much better either. Father-figure Professor X, reduced to a rambling, muddled shell of a man, is suffering from a degenerative disease and has become a ticking time bomb. For Logan, this is clearly hard to bear. In this new mutant-invisible world, Logan has hung up his leather clothes, given up the fancy mansions and super jets, and makes a living chauffeuring bachelorette and funeral parties, scrimping and saving to buy a boat that will allow him and Xavier to finally get their own happy ending at sea, away from the evil men do.

The camera spends long lugubrious minutes trained on Jackman’s face as he depicts Logan’s anguish in a way seldom seen in the bombastic superhero genre. Whether he is on the verge of tears as he says goodbye to old friends or struggling to comprehend the war that has found him despite his best efforts to stay hidden, Jackman is the rock that Logan is built on. But almost every actor in here shines. Stewart, potentially also turning in his last performance as Xavier, flips between foulmouthed crazy and paterfamilias lucidity with ease. Stephen Merchant has a memorable, if short, turn as the mutant truffle pig, Caliban.

The breakout star of Logan is Dafne Keen, who portrays “last mutant” Laura—Logan’s laboratory-created daughter. The 12-year-old shines in a role that could easily have devolved into parody in the hands of a lesser actor. Childlike but worldly, naïve but battle-worn, Laura is a study in contradictions and Keen doesn’t miss a beat in shifting between her various facets as the role merits. The role is substantive. After Jackman, Keen has the most screen time and the meatiest storyline. Her role has sparse dialogue—a common refrain through Logan, which leaves a lot unsaid but fills in a tragic and heartbreaking back story between the lines. Her laconic wildcat physicality makes her impossible to forget.

Logan also takes trouble to keep a foot firmly grounded in reality even as rote evil scientist Dr. Rice (Richard Grant) raves about eugenics programs and manufactures designer babies to serve as cannon fodder. Mangold, who directed and co-wrote the movie, wisely takes care to keep the violence and special effects to a minimum, reflecting the brutal nature of the “reality” that has intruded on the larger-than-life X-Men universe. But when the hits start, they feel relentless. With each decapitation, stabbing, and wail of gunshots, Wolverine’s realization of how little time he might have left also builds steam.

When evil scientists and their genetically modified thugs are out to kill babies and children, you know you’ve reached the peak of humanity’s ugliness. But this is still a superhero movie and Mangold and co-writer Scott Frank have thrown in moments of familiar levity to lighten the mood for purposes of contrast. The Odd Couple bickering between Xavier and Logan is a particular delight, and Jackman’s deadpan responses elicit a fair round of laughs.

Largely a tour de force for the superhero genre, Logan is still a flawed movie—much like the heroes of the X-Men franchise. It struggles to define what its core conflict is. Is it the battle between nature and nurture? Or a battle between those who are born with “gifts” and those who obtain them? Or is it about the age-old war between tradition and progress? The script never seems to come together well enough to settle on a single thread.

Marketing itself as an adult showpiece of a superhero millions have grown up with, Logan also appears to fear coming across as too opaque and, in course-correcting, loses much of the subtlety that could have made it great. When the story isn’t hammering home the theme of loneliness and ever-encroaching mortality, it shines. Unfortunately, those moments are too few and far between, especially after the midway point.

The script is repetitive, as if the writers do not trust their audiences. In the scene where Logan, Xavier, and Laura are having dinner with a family they helped out of an earlier altercation, the audience sees how alone all three feel; how despite appearing as a family, they are anything but. Instead of trusting viewers to understand this, Mangold bizarrely chooses to have Xavier spell it out on screen mere minutes later. A touching moment of joint discomfort devolves into a blunt tool to advance Laura and Logan’s story at the expense of the viewer’s intelligence.

Fortunately, such flaws do not majorly detract from Logan’s core. It shows a broken world not so different from our own and offers a flicker of hope. It embraces the X-Men comics’ ethos of finding family among misfits. It depicts a man at his lowest but never lets him betray his dignity or his honor. It has heart—and that forgives a lot of shortcomings.

Wolverine the character will doubtlessly be back in cinemas within a few years. Superhero movies are big business and Fox has already announced plans for at least four movies in the extended X-Men universe over the next five years. But while the character might be back, Jackman won’t. Logan gives him the perfect place to… log out.