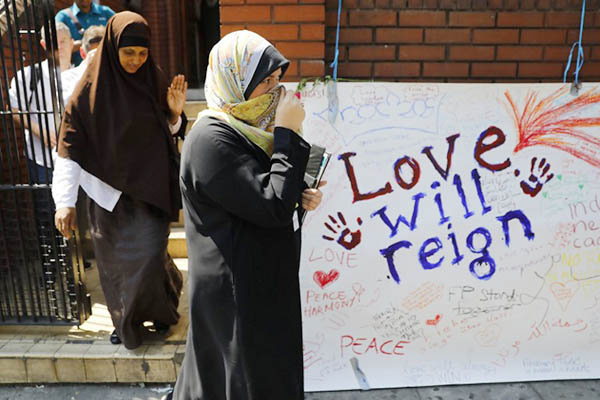 The 47-year-old accused of driving a van into a crowd of Muslim worshippers outside a London mosque was “troubled,” according to his family, while those who know him described a man who verbally abused Muslim children.

Darren Osborne, a father of four from Cardiff in Wales, was arrested after the attack near Finsbury Park Mosque early Monday and is being questioned by police on suspicion of attempted murder and terrorism. According to witnesses who detained the man before police arrested him, he was shouting that he wanted to “kill all Muslims” before he was taken away.

Neighbors said Osborne had been thrown out of The Hollybush, his local pub in Pentwyn, a suburb of Cardiff, on Saturday for drunkenly insulting Muslims. “He was cursing Muslims and saying he would do some damage,” according to a regular at the pub quoted by The Sun.

His Muslim neighbor, Khadijeh Sherizi, said she had never had any problems with Osborne until this weekend, when he insulted her children. Her son Nadeem, 12, was quoted in The Guardian as saying: “I was on my bike and he just came up to me and said ‘inbred’.” His sister Nadia, 10, said she and her grandmother had heard Osborne using the same word. “All of a sudden we heard him say ‘inbred’.”

Other neighburs said that Osborne’s behavior had become erratic in recent weeks, and that he was living in a tent in the woods after splitting up with his long-term partner. “Around two weeks ago I saw him and he was a right state,” Peter Mackuin, 53, told The Sun. “His missus had been out looking for him, I saw him wandering out of the woods.”

Sherizi told AFP of her shock when she recognized the suspect, saying: “I saw him on the news and I thought, Oh my God, that is my neighbor. He has been so normal. He was in his kitchen yesterday afternoon singing with his kids.”

His mother Christine, 72, said she screamed when she saw her son in television footage. “My son is no terrorist—he’s just a man with problems,” The Sun quoted her as saying.

In a statement on behalf of the family, his nephew Ellis Osborne, 26, said: “We are massively shocked. Our hearts go out to the people who have been injured.” His uncle was “not a racist,” he said, adding: “It’s madness. It is obviously sheer madness.”

Osborne’s sister Nicola added that the suspect had shown no interest in politics, telling The Sun: “He wouldn’t even know who the prime minister was.”

Some neighbors described a normal but loud character. “I know him. I’ve lived here for five years, he was already living here when I moved in,” said 50-year-old Saleem Naema. “If I ever needed anything he would come. I just can’t believe that he did that. I am a Muslim.”

But others described a man who attracted trouble, and who often argued in the street with his wife. “He’s quite a shouty person, always shouting at his wife and kids,” pharmacist Rebecca Carpenter told The Times.

Osborne was reportedly born in Singapore and is believed to have moved to Wales from Weston-Super-Mare in west England. Locals in Weston-super-Mare told the Times newspaper that he had left “because he was too much trouble,” frequently getting into pub fights.