London Attacker Was Saved by Imam of Mosque He Targeted 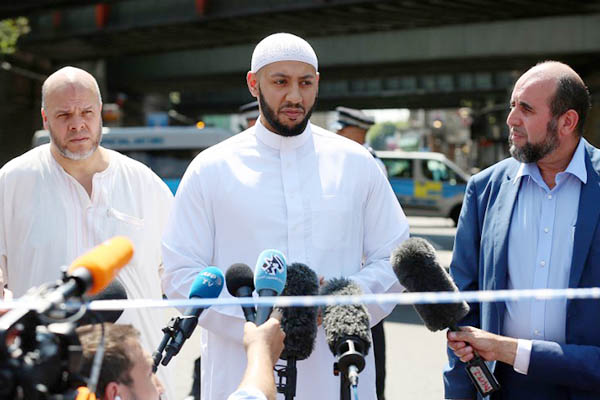 Worshippers leaving a London mosque early Monday were helping an elderly man who had collapsed when a van deliberately rammed them, driven by an attacker who shouted: “I want to kill all Muslims,” witnesses said. Shortly after midnight, the van swerved towards people who had just left prayers at the Finsbury Park Mosque and the Muslim Welfare House in north London and were assisting their stricken fellow worshipper.

The man who collapsed was pronounced dead at the scene and 10 people were injured, with eight taken to hospital. But the driver, pinned to the ground and facing a mob beating, was saved by the Welfare House imam who ordered infuriated younger men to stand back.

“He just drove at people,” witness Abdiqadir Warra told AFP of the attacker. “Some of them he took a few meters. The old man was also on the ground, and I see some people were also injured. Some of them were very bad.”

Another witness Mohammed Abdullah told Sky News television: “He actually went on top of the people, he actually ran them over. And then all I can just see is people getting hit.”

Locals pounced on the driver and two or three men pinned him down, then others waded in, trying to punch and kick him. Imam Mohammed Mahmoud then stepped in and, according to onlookers, saved the driver’s life by ordering angry bystanders to stand away.

“I’m restraining him,” one man shouted. “Don’t touch him! Don’t touch him!” eyewitness video footage showed. “Look what’s happened!” shouted another. “Calm down,” someone says as the driver reels on the ground. “He had been restrained by about three people. The injured and the deceased brother were being tended to,” Mahmoud told reporters. “We found a group of people quickly started to collect around the assailant. Some tried to hit and punch and kick him. By God’s grace we managed to surround him and protect him from any harm.”

A police van drove by, and the driver was dragged up to his feet. When the suspect was being led away into the police van, he seemed dazed and bewildered.

“Why did you do that? What did they do to you?” someone shouted in an angry voice.

There were furious shouts as he was put into the police van, with one man wading in with a kick. “The driver of the van said, ‘I did my bit’,” said MWH chief executive Toufik Kacimi. “He did what he did deliberately to hit and kill as many Muslims as possible.”

Khalid Amin told BBC television that when people seized the driver, “he was shouting: ‘All Muslims, I want to kill all Muslims’.”

Witness Abdul Rahman, who told the BBC he struck the driver and helped subdue him, also claimed the man had said he wanted to “kill all Muslims.”

Police confirmed that a 47-year-old man had now been arrested on terror grounds.

Meanwhile one man was thought to be trapped under the suspect’s van and a dozen or so men tried to lift it up. A video clip taken by a female witness and seen by AFP shows the white rental van and one man laying on the side of the road with his head propped up. A man said the wounded victim was pulled from under the van.

Another clip shows a man administering heart massage to a man on the ground, another person lying face down on the street, and a third sitting up with fellow worshippers holding what looked like a towel or a top to his head, with many worried-looking people close by.

Zahra Musa, 43, who filmed the second clip, told AFP that people were leaving the mosque for a food break when the incident happened. Another witness, who gave his name as Athman, told AFP: “People were screaming: ‘It’s a terrorist attack, it’s an attack, this guy attacked us,’ and I had to run back and tried to save people who were still alive and giving water, helping the police. While he was in the police van he was waving for victory, he was very happy.”