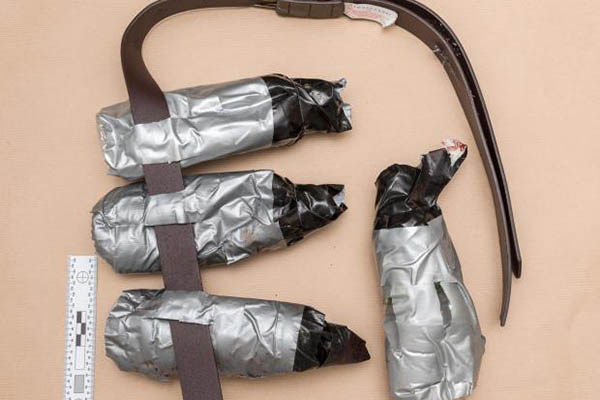 Fake suicide vests worn by the assailants in the London Bridge attack were made with disposable water bottles attached to leather belts, police revealed on Sunday.

“I have not seen this tactic in the U.K. before where terrorists create maximum fear by strapping fake explosives to themselves,” said police commander Dean Haydon, who is leading the investigation. His force released photographs of the blood-smeared bottles covered in silver and black tape, through which the brown belts had been laced.

“Anyone who saw them on the night would have thought they were genuine. It is hard to speculate what the motive was for wearing the belts,” Haydon said in a statement. “It could be that they had plans to take the attack in to a siege situation or it might be that they saw it as protection from being shot themselves.”

Khuram Butt, Rachid Redouane and Youssef Zaghba killed eight people last Saturday night after driving into pedestrians and then embarking on a stabbing spree on the popular nightlife spot. They were shot dead by police. It was the third terror attack in Britain in as many months, and was claimed by the Islamic State group.

Haydon praised the bravery of police officers and members of the public who tackled the men, saying the vests would have been clearly visible. “If you are fighting back or aiming a shot at someone wearing the device you would clearly be very aware that you could be caught in an explosion,” Haydon said.

Police arrested 20 people after the attack and seven remained in custody on Sunday. It was earlier revealed that the assailants had prepared a stash of Molotov cocktails and initially tried to hire a truck rather than a van to mow down pedestrians.

Forensic officers examining their vehicle found “13 wine bottles with rags wrapped around them and believed to be filled with a flammable liquid,” as well as two blowtorches, police said.