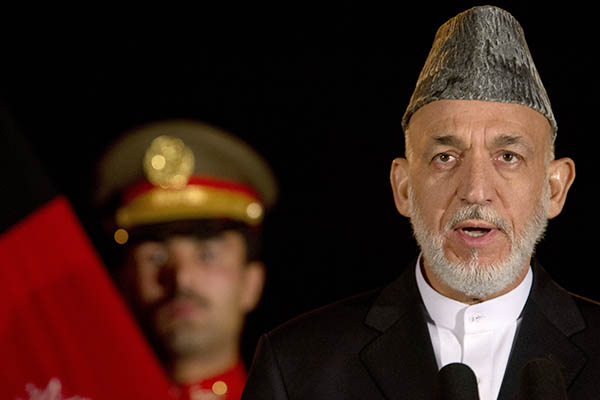 In trilateral talks, Kabul wants Islamabad to explain where former Taliban commander is detained, how talks can be facilitated.

Afghan President Hamid Karzai will push Pakistan to reveal the location of key Taliban commander Mullah Baradar during trilateral talks to be held in Britain on Tuesday, officials in Kabul said.

Baradar was released from jail in Pakistan as part of efforts to kickstart Afghanistan’s peace process, but he has since been kept under house arrest, reportedly in Karachi or Peshawar, to the fury of Afghanistan.

The High Peace Council is the Afghan body charged with opening negotiations with the Taliban insurgents as U.S.-led NATO forces prepare for withdrawal from the country by the end of next year.

Afghan officials believe that Baradar, who had been held in jail in Pakistan since 2010, could encourage Taliban leaders to seek a negotiated settlement to end the 12-year insurgency if he were fully at liberty.

“Prime Minister Nawaz Sharif promised the release of Mullah Baradar, which they did, but Mullah Baradar is still under very strict supervision by Pakistan authorities,” Faizi said.

Karzai, Sharif and British Prime Minister David Cameron will meet on Tuesday for the fourth trilateral summit designed to foster stability in the volatile south Asia region. Apparent headway between then-Pakistani president Asif Ali Zardari and Karzai at the last summit hosted by Cameron in February quickly unraveled in a series of public rows.

He said Afghanistan expected Pakistan to stop militants crossing the border to launch attacks in the run-up to the April presidential elections for Karzai’s successor. “Pakistan can play a role to maintain Afghanistan security for upcoming elections because these terrorists are coming from the other side of the Durand Line (border) to Afghanistan,” Faizi said.

Karzai, who must step down next year after serving two terms, will also give a speech at the World Islamic Economic Forum in London, and at the Oxford Union, the university’s debating society, during his four-day visit.

The search for a peace deal in Afghanistan is urgent as 87,000 NATO combat troops prepare to withdraw next year and the national army and police take on the fight against insurgents. A Taliban office in Qatar that opened in June was meant to lead to talks, but instead it enraged Karzai after it was styled as an embassy for a government-in-exile.

Pakistan was a key backer of the hardline 1996-2001 Taliban regime in Kabul and is believed to shelter some of the movement’s top leaders. Islamabad officials were not immediately available to comment on the London summit.