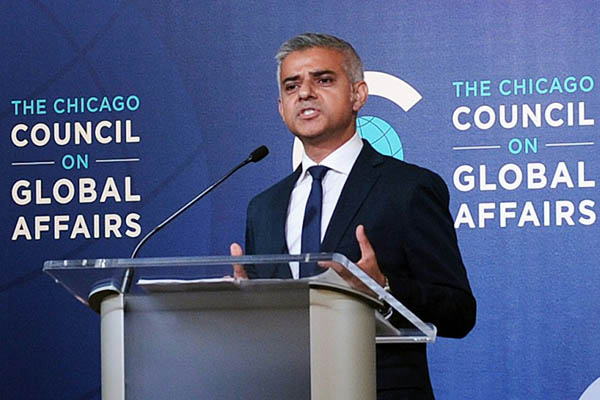 Khan, who is of Pakistani descent and became the first Muslim mayor of a major Western capital when he was elected in May, arrived in Chicago to begin a U.S. trip promoting trade ties.

Trump at one point called for a ban on Muslim immigration into the U.S. The candidate has since modified his stance to urge an immigration ban from countries with “a proven history of terrorism” and for “extreme vetting” of immigrants.

“We play straight into the hands of those who seek to divide us, of extremists and terrorists around the world, when we imply that it’s not possible to hold Western values dear and to be a Muslim,” Khan said to applause from an audience at The Chicago Council on Global Affairs. It was his first visit to the U.S. as London’s mayor.

“People shouldn’t have to drop their cultures and traditions when they arrive in our cities and countries,” Khan said, “We all have multiple layers of identity.”

Khan’s North America trip began in Canada earlier on Thursday in a meeting with Prime Minister Justin Trudeau. In Chicago, he planned to visit a technology incubator hub and stress opportunities for Chicago companies to establish European headquarters in London.

He is joined on his trip by a delegation of British tech industry executives, as they attempt to mitigate future economic impacts from Britain’s ‘Brexit’ vote to leave the European Union. Khan’s five-day trip will also take him to New York, where he plans to visit a housing project and to meet with Rob Manfred, the commissioner of Major League Baseball, to discuss bringing the American sport to London.