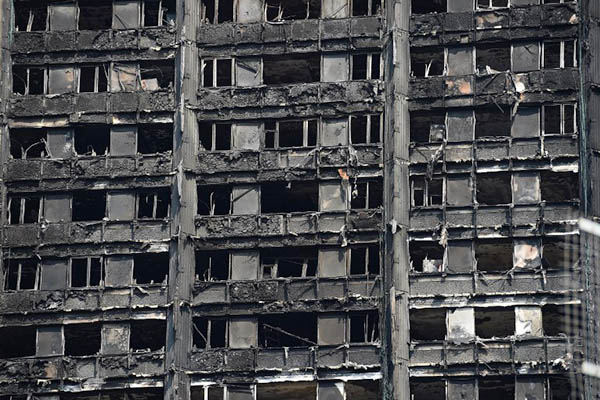 Seventy-nine people are dead or missing and presumed dead following a devastating blaze in a London tower block, police said on Monday, as Britain held a minute’s silence for the victims.

“I’m afraid to say there are now 79 people that we believe are either dead or missing and I sadly have to presume are dead,” police commander Stuart Cundy told reporters. Police had earlier put the toll from Wednesday’s inferno at 58 presumed dead.

He said only five people had been formally identified so far by police. Officers had earlier warned that some might never be identified due to the condition of their remains.

Cundy said the search and recovery operation was ongoing in the burnt-out 24-storey tower, which was built in 1974 and had received a major refurbishment that was completed last year. “This is an incredibly distressing time for families and they have my commitment that we will do this as quickly as we possibly can,” he said.

Cundy promised an “exhaustive” criminal investigation into the fire that would also look at the refurbishment. “We will go where the evidence may take us,” and do everything possible “to ensure that those responsible will be brought to justice,” he said. “If I identify… an issue that is a risk to public safety, we will be sharing that immediately with the relevant authorities,” he added.

The fire has prompted warnings about fire safety risks in many other council tower blocks built in the same era.

Cundy warned that the toll of 79 people could change. “I believe there may be people who were in Grenfell Tower that people may not know were missing and may not have realized they were in there on the night. Equally, there may be people who thankfully may have managed to escape the fire and for whatever reason have not let their family or friends or police know,” he said.

By the blackened Grenfell Tower, firefighters took off their helmets and stood still to observe the minute’s silence, some with their arms around each other’s shoulders. Other emergency service workers stood with their hands behind their backs and their helmets on the ground. Distressed women were seen hugging after the silence.

London fire chief Dany Cotton told BBC radio that it might be “some days yet” before firefighters could say they have reached everyone in the building. She also defended the fire service’s advice for people to stay in their flats during tower block fires, saying that having everyone evacuate from such blocks through a single staircase would cause further injuries and hamper efforts to put out smaller blazes. She said firefighters did not know “why the fire spread in that absolutely unusual and extraordinary way.”

“Until we do that, we cannot look at anything other than staying with the same advice.”

The National Health Service said that 17 patients were still being treated in hospital, of whom nine remain in critical condition. Prime Minister Theresa May was to chair another meeting of top officials in response to the tragedy.

London police on Sunday released images taken within the tower, saying conditions inside verged on the “indescribable.” Photos and videos published by the Metropolitan Police show the gutted wreckage of apartments.

With blackened rubble strewn across the floor and exposed pipes, one room is unrecognizable as a home until a bath and sink come into view—the dividing wall destroyed completely by the fire. The remnants of an exercise bike, an oven and washing machine point to the lives of residents in the moments before the blaze. The images were taken by a recovery team inside the 120 flats.