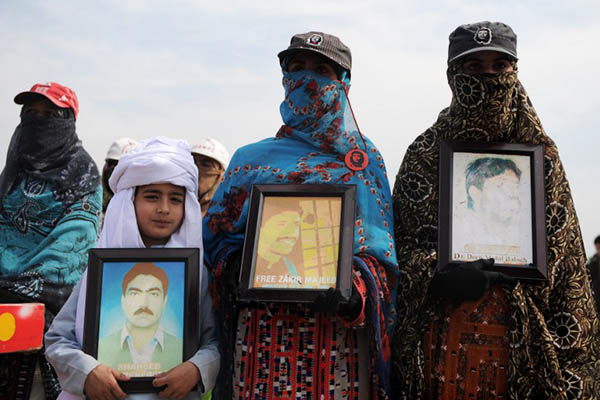 Marchers say they have lost faith in Pakistani government and hope international organizations can exert pressure to find disappeared relatives.

After 2,000 grueling kilometers on the road, a band of families led by a 72-year-old are due to reach the end of their protest march over missing relatives in Islamabad on Friday.

The marchers are relatives of people who have disappeared in Balochistan province, allegedly at the hands of the country’s security services. Led by a retired banker known as Mama (uncle) Qadeer, they hope to present a petition to U.N. officials in Islamabad and meet foreign diplomats to raise awareness of their cause. The marchers set out from Quetta last October, walking first 700 kilometers to Karachi, before turning their steps northwards to Islamabad.

“We want to tell (the world) that people are being kidnapped every day in Balochistan, districts are being bombarded and almost every day we are receiving mutilated bodies,” said Qadeer on the road close to Rawalpindi, Islamabad’s twin city. “We have no more hope in the Pakistani government, which is why we want to talk to international organizations, so they can apply pressure.”

Qadeer’s son Jalil Reki, a member of the Baloch Republican Party, which is suspected of links to the armed insurgency, was found shot dead in 2011 after going missing.

Balochistan is Pakistan’s largest but least populous province. It is also the least developed, which has exacerbated a long-running ethnic Baloch separatist movement that wants more autonomy and a greater share of its mineral wealth.

The latest armed insurgency rose up in 2004 and separatist groups still regularly attack Pakistani forces. Rights groups accuse the military and intelligence agencies of kidnapping and killing suspected Baloch rebels before leaving their bodies by the roadside.

According to Human Rights Watch, more than 300 people have suffered this fate—known as “kill and dump”—in Balochistan since January 2011. The security services deny the allegations and say they are battling a fierce rebellion in the province.

The Supreme Court has also been investigating cases of missing people in Balochistan, issuing warnings to the government to recover these people.