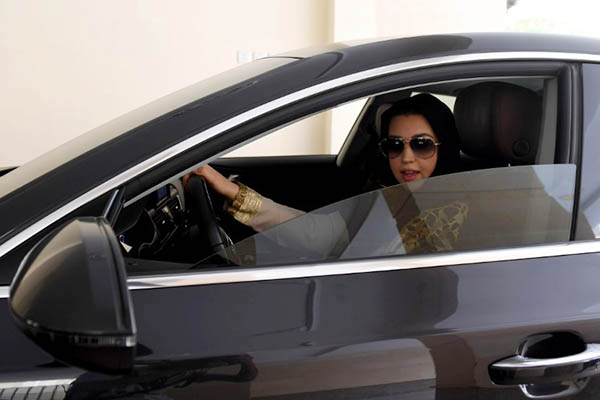 Long relegated to the back seat, Saudi women celebrated taking the wheel for the first time this week in a much-awaited rite of passage, but one crucial hurdle remains—the attitude of men.

Social media is awash with videos of women behind the wheel and men in the passenger seat, a role reversal that was unimaginable in the conservative petrostate until a royal decree last September ended a decades-long women driving ban. A woman driver is such a novelty across the gender-segregated Muslim kingdom that when the decree took effect on Sunday, it prompted jubilation, disbelief—and reactions akin perhaps to those evoked by the first woman doctor in the 19th century.

“Look, a woman driver!” appeared to be a common refrain among male onlookers in Riyadh as women embraced a freedom long denied to them.

Now many are quietly bracing for a battle of the sexes on Saudi streets.

The driving reform has been widely hailed by young Saudis and no overt incidents of harassment were publicly reported in the first two days since the ban was lifted, but many are wary of pervasive sexism and aggression from male drivers despite warnings from authorities. “I advise men to stay home to avoid being killed by women drivers!” said one Saudi Twitter user, echoing a torrent of similar comments predicting a surge of accidents because of female motorists.

Often accompanying such comments are images of fiery car crashes and traffic pileups. And then there are the condescending mansplainers.

Some social media users have advised women to “avoid putting on makeup” while driving. Others have predicted pink colored cars and parking lots for women.

Fueling the sexist ridicule, as women drivers hit the roads for the first time on Sunday, Saudi media splashed images of the inauguration of a gleaming new holding cell for women traffic violators.

Many women have responded with defiance. “Social media is flooded with messages ridiculing women and underestimating their ability to drive,” columnist Wafa al-Rasheed wrote this month in Okaz, a Saudi daily. “We will drive and we will drive better than you, men.”

For now, the women taking to the roads appear mainly to be those who have swapped foreign licenses for Saudi ones. Some 120,000 women have applied for licenses, according to an interior ministry spokesman, who declined to specify how many had been issued.

But the fear of harassment is so widespread that many women are keeping away from the streets, testing reactions in a society torn between conservatism and social change engineered by Crown Prince Mohammed bin Salman.

“Several men have shown concern that women relatives who drive will be harassed, followed, chased and videoed by male drivers,” Abdul al-Lily, author of the book The Bro Code of Saudi Culture, told AFP.

A Saudi woman interviewed by AFP said she had deferred plans to drive, voicing a fear of “road Romeos,” who might deliberately crash into her car just to find an excuse to talk.

Rights groups say the driving reform is mere tokenism until the kingdom dismantles its much-criticized system of male “guardians”—fathers, husbands or other relatives, who can exercise arbitrary authority to make decisions for women.

Authorities, however, have said that Saudi women will not need a guardian’s permission to apply for a driver’s license. The government has also addressed concerns of abuse by outlawing sexual harassment, and authorities have sternly warned against stalking women drivers.

Authorities this week said the first batch of women insurance inspectors are training to respond to accidents involving female drivers, but it remains unclear when they will start work.

The new provisions come after Saudi authorities last October arrested a man who threatened a violent backlash against any female driver whose car breaks down. “Men ought to be scared that even joking about harassing women could land you in jail,” Hesham Alghannam, a Saudi researcher at Britain’s University of Exeter, told AFP. “Eventually even the most conservative will have to adapt and over time women drivers will become the new normal.”

Among those pushing back against such attitudes are men themselves, many of whom have quietly expressed relief that their female relatives no longer have to rely on them or foreign chauffeurs, a major financial strain, to be driven around. “Women, do not let anyone distract you from this moment, whether men ridiculing your ability to drive or anyone else,” said Ahmad al-Shathri, who is based in Riyadh. “This moment is yours and no opinion matters except your own.”