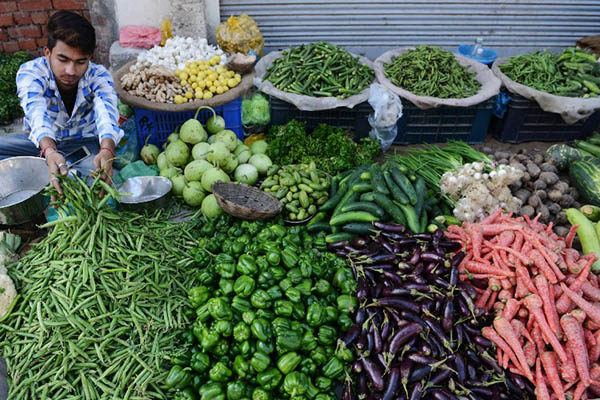 Global warming is expected to make vegetables significantly scarcer around the world, unless new growing practices and resilient crop varieties are adopted, researchers warned on Monday.

By the end of this century, less water and hotter air will combine to cut average yields of vegetables—which are crucial to a healthy diet—by nearly one-third, said the report in the Proceedings of the National Academy of Sciences.

A 7.2 Fahrenheit increase in temperature, which scientists expect by 2100 if global warming continues on its current trajectory, reduces average yields by 31.5 percent, said the report. “Our study shows that environmental changes such as increased temperature and water scarcity may pose a real threat to global agricultural production, with likely further impacts on food security and population health,” said lead author Pauline Scheelbeek of the London School of Hygiene and Tropical Medicine.

Southern Europe, large parts of Africa and South Asia may be particularly affected.

The findings are based on a systematic review of 174 studies examining the impact of environmental exposures on yield and nutritional content of vegetables and legumes since 1975. Some previous research has pointed to a likely increase in crop yields as carbon dioxide rises, but the current review found that any such boost would be cancelled out by higher greenhouse gases, reduced water availability for irrigation and rising temperatures.

“We have brought together all the available evidence on the impact of environmental change on yields and quality of vegetables and legumes for the first time,” said senior author Alan Dangour, also of LSHTM. “Our analysis suggests that if we take a ‘business as usual’ approach, environmental changes will substantially reduce the global availability of these important foods,” he added. “Urgent action needs to be taken, including working to support the agriculture sector to increase its resilience to environmental changes and this must be a priority for governments across the world.”

A second study in PNAS found that rising temperatures would increase the volatility of corn, the most widely grown crop on the planet.

Researchers confirmed prior studies that showed global warming would likely cut back on corn growth. They also showed that heat waves might boost inconsistency and volatility across various regions from year to year, leading to price hikes and global shortages.

“Previous studies have often focused on just climate and plants, but here we look at climate, food and international markets,” said lead author Michelle Tigchelaar, a University of Washington postdoctoral researcher in atmospheric sciences. “We find that as the planet warms, it becomes more likely for different countries to simultaneously experience major crop losses, which has big implications for food prices and food security.”

The vast majority of the global corn exports come from the United States, Brazil, Argentina and Ukraine. “Under 4 degrees Celsius warming, which the world is on track to reach by the end of the century if current greenhouse gas emissions rates continue, there’s an 86 percent chance that all four maize-exporting countries would simultaneously suffer a bad year,” said the report.