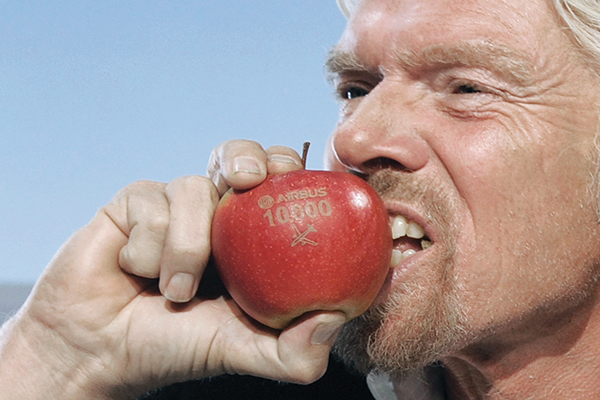 In conversation with Sir Richard Branson.

Sir Richard Branson, the colorful captain of the great Virgin enterprise, set up his first business, a magazine, at age 16. Today, the 63-year-old British billionaire owns some 400 companies ranging from music and video stores to cellphone and cable services to a world-class airline. We spoke with the entrepreneur recently about his work, his mantra, and much more. Excerpts:

Tell us about Virgin’s work on renewable energy.

We have set up the Virgin Green Fund to invest in these opportunities and, over time, I would hope some of these companies will help to reduce our environmental impact. There is still some way to go on developing renewable jet fuels that can be sustainably deployed at a meaningful scale, but our airlines are working on bringing other airlines, aircraft manufacturers, engine makers, and the big fuel companies behind the effort. We believe that all businesses, especially those involved in transportation, must be at the forefront of developing environment-friendly business strategies with a focus on replacing traditional energy with energy coming from renewable sources.

What converted you into an environmentalist?

It started with a phone call from Al Gore. He wanted to show me An Inconvenient Truth; his poignant and elegant reduction of [climate change] issues really struck a chord with me as an interested nonexpert. Tim Flannery’s The Weather Makers also had a pronounced effect on me.

What’s Virgin’s focus in the emerging markets of Asia?

Over the last decade there has been a significant shift in the world’s focus to the emerging markets. China and India have grown fast. They have built modern airports, roads and towns, and invested in new industries to propel their economies into the 21st century. This has been matched by growth in South America, parts of Africa, and South East Asia, creating many new and compelling investment opportunities. The developed world, in particular the Western economies of Europe and the U.S., has been alert to this growth, with most multinationals and many entrepreneurial companies very focused on building businesses and partnerships in these high-growth markets. Virgin is no exception. Virgin Atlantic flies to China, India, and Africa; and we have started mobile businesses in India, Colombia, Chile, and South Africa. Virgin Radio has successful stations in India, Thailand, and Dubai. Virgin Active’s fitness clubs are open in Singapore and Thailand.

Virgin Radio sold some of its assets to an Indian company in 2008.

The U.K. station was indeed bought by India’s Times Group and the new management decided to rebrand the business, which was a shame since we had built a very strong brand in the U.K. over many years. Times of India are just one of many foreign companies attracted to the media market in the United Kingdom. Hopefully, one day, we can find another local partner to rebrand Virgin on a U.K. radio station. I think it would do very well.

Virgin operates across the world. How does it customize its services for particular regions?

Even though Virgin operates in a number of different industries and regions, we always try to ensure that our brand principles remain consistent across the whole group. This is very important to us. Wherever we go, we offer a fun, high-quality service that is good value for money. However, it is also important to tailor the brand to the local culture of a region whilst retaining the core principles of the brand. In India, for example, we offer a range of Bollywood movies as part of our in-flight entertainment so everyone can keep up to date with the latest blockbuster releases. We always cater our onboard menus toward our flight destinations wherever we fly. This means that our Delhi and Mumbai flights do offer a selection of delicious Indian cuisine.

Your Virgin Galactic aims to make space tourism possible. Why the fascination with space?

It all started back in 1969 at my family home in England with my parents and two sisters watching the live black-and-white pictures of astronauts traveling to the moon. I was spellbound. From then on, I was determined that one day I would follow them to space! Thanks to the work of an extraordinary team at Virgin Galactic, that dream is close to becoming a reality. We hope to take people from every walk of life into space. I am so proud of Virgin Galactic. I can’t wait!

The Elders is described as “independent global leaders working together for peace and human rights.” You’re part of this Mandela-formed organization alongside Peter Gabriel and Desmond Tutu. Tell us about this group.

This is a group of men and women from around the world who, through their own lives, have shown independent leadership, strength of character, and, put simply, an innate sense of fair play when dealing with some of the world’s most pressing problems. By taking full advantage of modern technology, whether that is the Internet or mobile technology, The Elders’ mission is to encourage as many people from all over the world, both from urban areas and rural communities, to come forward and speak out about the issues that are really affecting their lives. By harnessing this technology, The Elders will listen to as many voices as they can and give a voice to those who are currently unheard.

You’re devoted to social work and have spent a fortune on charity. What pushed you in this direction?

Stuff really is not what brings happiness. Family, friends, good health, and the satisfaction that comes from making a positive difference are what really matters. As a young man, I never set out to make money. We set out to create things that we could be proud of and to try and make a difference. From founding The Student magazine to give young people in the 1960s a voice on issues such as the Vietnam War to creating Virgin Galactic to explore space, we have always tried to do things a little differently and challenge convention. I now spend about 80 percent of my time with Virgin Unite, the Virgin Group’s not-for-profit foundation, which helps create and build entrepreneurial solutions that make a positive difference in the world. I am passionate about leaving this planet in a better position for future generations than it was when I was born, and I believe that business should sit at the heart of the healing process; business should be a force for good.

You have over 400 companies in the Virgin Group and some 50,000 staff around the world. What’s your management secret?

From a very early time, when we went from one company to two companies, I realized I couldn’t do everything myself. I had to learn the art of delegation; and try to find people who are better than me to run the companies—that wasn’t that difficult! Finding people who are more managerially-inclined rather than entrepreneurially-inclined was important. So from an early age, I would always try to put myself out of business so I would be free to think about how to take the Virgin Group into a new era.

How did you make the Virgin brand ‘fun’?

Virgin does approach business differently. Most companies claim to put customers first. Our approach is to put staff first: treat the employees right, and they will treat customers right, and profits will follow. That has helped develop Virgin’s reputation as being a fun place to work. One of the tricks I learnt early on, which helps ensure a company keeps its energy high and a fun atmosphere, is to not let a company get too big. When a company got to 100 people, I would often split it in two and create two managing-directors to give them each a sense of ownership. This keeps things fresh.

Where does your drive come from?

Lots of things motivate me. The excitement of setting up new businesses allows us to learn about new technologies and new territories. At Virgin, we enjoy shaking up market sectors which, until Virgin comes along, are generally controlled by a few major corporations. Basically, close your eyes and try and imagine going into work every day, even after over 30 years in the same job, and being faced by new challenges, new problems to solve, and a group of amazing people who love to take on the same challenges as you do. That’s pretty much what drives me every day.

Entrepreneurs take enormous risks that don’t always succeed. What are some of the biggest or most expensive mistakes you’ve made?

It’s never easy to set up any business, every one of our businesses has had challenges, but it comes back to determination and drive and the love of what you do. There have been times when I thought the whole company was going to go down the pan, especially in the early years. When I launched Virgin Airlines, I put my house, car, and what little savings I had at risk—not forgetting I was doing all of this to compete against British Airways, the biggest airline in the U.K. Naturally, there were huge risks, but I never once thought I’m doing the wrong thing. I, and the people around me, believed 100 percent we could make Virgin Atlantic a success. And just look at it now!

What is the way forward for business?

It’s no longer viable for businesses to think just of themselves. They must stand for something broader and make a difference in people’s lives by balancing profit with the communities and environments around them. My philosophy of “screw business as usual” confronts the dilemma that capitalism without a conscience is no longer sustainable. It shows us how we can create win-win situations, where what is good for profit can also be good for people and the planet. The B Team, one of the many organizations Virgin Unite has incubated over the years, addresses the future of business and is framing a new approach where people and planet are priorities alongside profit.

The interview was kept remarkably on point and informative without it becoming burdensome. Well done Newsweek Pakistan!

Remarkable man, doing a good Job. We need such people to save the environment from pollution. a dedicated man to the good cause. Hats off to him.