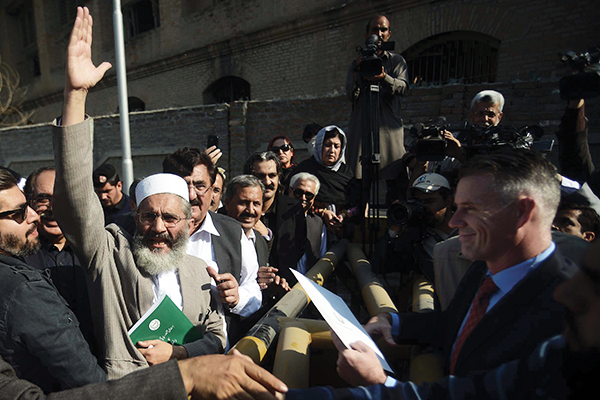 To borrow from its information czarina, has Pakistan Tehreek-e-Insaf lost its marbles? Outraged by the Nov. 1 U.S. drone strike in federally-administered North Waziristan and the Nov. 21 strike in the provincial district of Hangu, Khyber-Pakhtunkhwa province’s ruling coalition, headed by the PTI, held a fulminous protest in Peshawar on Nov. 23 threatening to halt NATO supplies—but not directly, it wants the Supreme Court to do the needful. The next day, party diehards took it upon themselves to stop and search all cargo traffic in Peshawar, defying the police which reports to their own party’s government. Shamed by the press, PTI, the Movement for Justice, directed police to arrest the vigilantes. The all-bark, no-bite PTI also says its chief minister has written to the federal government demanding they stop NATO traffic through his province. PTI has written to the U.S. as well. On Nov. 25, party lawmakers stormed over to the American Consulate in Peshawar and delivered a letter of great protest at the gate. The party had also filed a police report against the Hangu strike, attributing it to “unknown persons,” another source of national marvel at PTI’s comic desperation. This report was subsequently amended to cite the U.S. government and the CIA, and name the CIA station chief posted in Pakistan, as the perpetrators. Sadly, PTI’s sorry deeds will do nothing to calm Pakistan’s most troubled province.