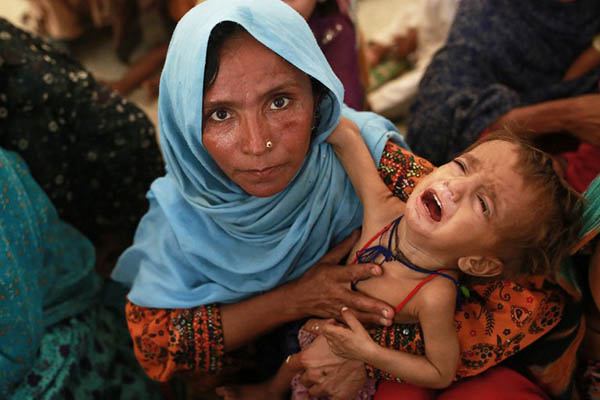 Country’s rate of growth stunting among highest in the world, says UNICEF.

Mother-of-seven Mah Pari lives in a fertile region of Balochistan province—but her two-year-old son, Gul Mir, is crying from hunger as she cradles him in her arms. “All my babies were weak after they were born. Maybe it is because my breast milk is not good,” she sighs.

In Pakistan, many mothers are told to feed their newborns tea, herbs or formula milk, one of the major factors behind a stunted growth rate in children of a staggering 44 percent. “In our Balochi culture, we give battri, crushed herbs twice a day, morning and evening,” says the distraught mother, whose eighth pregnancy was barely showing under her skillfully tailored yellow tunic. “I also gave him tea and breast milk twice a day, in the morning and the evening,” she adds—far less than WHO recommendations.

Elsewhere in the country, babies are often fed ghee, honey or sugar cane.

“I work all day at home, I don’t have time to breast feed,” says Mah Pari, who firmly believes that traditional concoctions are better than her own milk.

Gul Mir, age two, registers just 5 kilograms on a weighing scale in a rural mobile feeding center run by Doctors Without Borders (MSF) in Manju Shori. That is less than half the ideal weight for a toddler his age, while the average newborn in the West weighs 3.5kg—and his deprivation at such a critical stage is likely to have permanent consequences.

The situation is not limited to Balochistan, the poorest and least stable of Pakistan’s four provinces. The country’s rate of growth stunting is among the highest in the world, according to UNICEF, because of a lethal mix of risk factors: bad nutrition, hygiene problems and unclean water, combined with a lack of education for mothers.

The consequences are permanent and disabling: limited height, incomplete brain development, and elevated risk of disease. It has a huge impact on the national level, reducing IQs and productivity of a large percentage of the population.

It “is a crisis, it’s a massive emergency,” said Angela Kearney, head of UNICEF in Pakistan, emphasizing that one the leading causes of malnutrition is the limited breastfeeding.

Only 38 percent of babies are fed breast milk exclusively during their first six months in line with the U.N. recommendations. This low figure is blamed on local traditions, the heavy workloads of mothers and powerful marketing by the milk industry.

Like many grandmothers, Razul looks after the children when her daughter-in-law is working at home or in the fields. “The doctor told us to give the baby Number One milk,” she says, referring to a brand marketed by Nestle.

It was a disastrous decision for her granddaughter Akila: The water in feeding bottles is often unclean, and as families are poor, they use only one spoon of powder.

Razul says her daughter-in-law doesn’t have enough breast milk because the family is poor and she can only eat bread. But, as is often the case, they decided to buy baby milk instead of feeding the mother better.

“People here think that only formula can give energy to their children,” explains Imtiaz Hussain, a provincial health official. “It is prescribed by doctors, often quacks, who are after money and get kickbacks from pharmacy stalls,” he claims. “There is lack of knowledge, and unethical and aggressive advertising of breast milk substitute,” adds Kearney, despite an international convention and Pakistani law, which prohibits marketing breast milk substitutes.

Nestle, for its part, says its adheres to the law “very strictly” and its representatives can only contact health professionals, not parents, to advise them on the nutritional facts about their products. But badly advised mothers still refrain from breastfeeding at the moment when the child needs it most: the hours after its birth or during periods of sickness.

“Some mothers do not agree to breastfeed [for] fear of passing on diseases” or hampering recovery, laments Mohammad Siddique, nurse supervisor of the nutrition department of MSF Balochistan. “As for formula milk, they are often prescribed (…) for the first 24 hours of the baby’s life, because the mother does not feed him her colostrum,” he adds, referring to the mother’s first milk that contains vital antibodies that protect newborns against disease.

Many women find themselves bewildered at the appearance of this secretion that marks the beginning of lactation. “We… throw that milk, throw it aside, because the color is yellow and it is watery,” says Samina as she gently rocks her 10-day-old daughter Kosar, who is suffering from meningitis.

The government, which claims to be “aware of the problem,” has set a goal of reducing the rate of stunting to 40 percent by 2018—but the issue isn’t mentioned in its 10-year plan. Most interventions are funded by international donors.

“It has to get better,” says Kearney, calling on fathers, grandmothers, obstetricians and vendors of infant formula to support mothers in breastfeeding. “Breast is best,” she says.