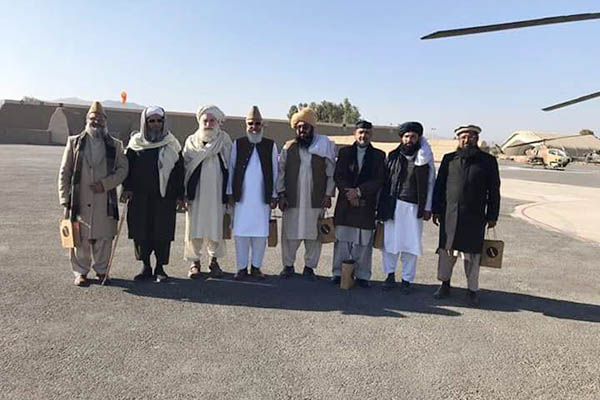 Tackling a conflict, especially one that has been and is being fought among the people, is not about making linear, clear-cut, absolute choices

Predictably, there was a flood of tweets criticizing the Army for arranging the trip. This is not unusual for some accounts known for not missing any opportunity to troll and target the Army. But the visit was also criticized by those who have balanced heads on their shoulders and are neither given to agenda-driven politics nor to sudden bursts of base enthusiasm.

So, how should one look at this visit?

ASWJ, under Schedule 1 of the Anti-Terrorism Act, is a banned organization. However, under the law, unless amended, someone on the fourth schedule can still contest elections. For instance, to contest elections, ASWJ decided to either field candidates as independents or under the banner of the Pakistan Rah-e-Haq Party, listed with the Election Commission of Pakistan. It’s the same with Tehreek-e-Jafaria Pakistan, which is also banned but has been part of the Mutahidda Majlis-e-Amal, an electoral coalition of rightwing religio-political parties that have Barelvi, Deobandi and Shia parties in it.

In its fight against the Tehreek-e-Taliban Pakistan and its affiliates, many of whom are from Deobandi sectarian outfits like Lashkar-e-Jhangvi and Jaish-e-Mohammad, the security forces and their intelligence agencies have used a two-pronged approach: fight, capture and kill those who cannot be convinced to lay down arms and co-opt those who can be weaned from violence.

There’s nothing radical about these two approaches. They have been tried, mostly in tandem, in other conflict zones, with varying degrees of success. In the case of Ludhianvi, he, and some of his lieutenants were co-opted by the intelligence agencies as part of the operation to clean up Punjab of sectarian terrorism.

Ludhianvi was also used to bring in Malik Ishaq, one of the most dreaded sectarian terrorists and the face of the banned Lashkar-e-Jhangvi. The same group also provided help to, and facilitated, terrorist attacks by the TTP and its Jama’at-ul-Ahrar faction.

Ishaq did initially come round and stayed away from violence for some time, but went back to his old habits. That created a rift between his group and Ludhianvi’s and his hitmen also killed a close associate of Ludhianvi’s. It was at that point that counter-terrorism (CT) experts decided that Ishaq needed to be sent to his Maker. Ishaq was killed in a shootout along with his two sons, his consigliere, Ghulam Rasool Shah, and several hitmen.

The dead Ishaq and the living Ludhianvi are metaphors for the two-pronged CT strategy that has been at play. There has been much criticism of what some call mainstreaming these terrorists. Personally, I am not keen on the term. The strategy is more about coopting than mainstreaming.

There is a reason for making this distinction: co-option, especially when there’s a conflict, raging or simmering, is about getting collaborators. ‘Collaborators’ is an extremely pejorative term. Insurgents, mafia groups, criminal gangs and syndicates, and terrorist groups are more afraid of collaborators than anything or anyone else. This is why a collaborator is utterly loathed and when identified and found is killed without any mercy. Collaboration is not just about informing the security forces of a group’s plans or operations but betrayal—and betrayal by one, unless (s)he is made a horrible example of can lead to questions, insubordination and fissures. No group fighting an asymmetric war can afford that.

The picture that shows these clerics in a line, and other pictures where they can be seen with Army officers and soldiers is a very strong signal to their cadres: co-option helps to (a) discredit these leaders in the eyes of the more hardline Deo-salafi cadres and (b) helps these clerics keep in line those followers who haven’t yet crossed the line. Working towards keeping extremists non-violent is as important, perhaps more, than killing those who perpetrate and perpetuate violence. That’s Irregular War 101.

Tackling and fighting a conflict, especially one that has been and is being fought among the people, is not about making linear, clear-cut, absolute choices. Yesterday’s enemy can be today’s collaborator and, worse, tomorrow’s enemy again. If there’s any profundity to what Michael Corleone said in The Godfather, “keep your friends close but your enemies closer,” it is here. Intelligence work is a complex undertaking. And if you are given to wearing Creed Aventus with a Pal Zileri suit, intelligence work is not for you because it stinks.

Also, there are no rules in the world of swamps. Intelligence agencies have to work with the very people they are supposed to fight. It’s called penetration and it’s tricky work, very tricky, in fact, and thankless. At the minimum, it is very different from using a keyboard to express one’s biases for or against this or that.

Gerry Adams is a good example: from being the public face of the Irish Republican Army during its bombing campaigns to being a peacemaker and then a mainstream politician, Adams’ journey depicts the complexity of politico-military strategies.

It’s a tough call, no doubt. There are never 100 percent guarantees of success. But there are not many alternatives. Fighting among the people is not about killing every baddie. It’s about discrediting a creed where ideologies are involved. What better way of doing so than by getting the very ideologues whose poisonous preaching is at the basis of the conflict?

When this conflict began, Abdul Aziz, the former prayer leader of Lal Masjid, got over 400 Deobandi clerics to sign a fatwa in 2004, condemning the Pakistan Army and banning people from offering funeral prayers for fallen soldiers. Posts and areas were falling to the Taliban; there were desertions and confusion. The soldiers weren’t sure who they were fighting and why.

Over the years we have seen the amazing turnaround. No one in the security forces is confused. The areas have been taken back, the TTP and its affiliated groups are in disarray. The TTP put out a Code of Conduct in September this year, directed towards its cadres. The document gives an insight into the group’s woes and its desperate efforts to revive itself and become relevant.

None of this could have happened without the work and sacrifices of the security forces, a term I use for the police, paramilitary, Army and assorted intelligence agencies.

In complex cases, police investigators often find one approver who can help stitch the case together. But there’s always a quid for that quo: the approver goes free. Not because he is innocent or any less culpable, but because without him the bigger fish or greater numbers cannot be busted and brought to the book.

Perhaps, somewhere above I said such decisions require a judgment call. By that I do not mean lack of a process towards a strategy. The process must be led by the new government and decisions made in and through the Cabinet Committee on National Security. In this case, while the move was smart, I cannot help make two observations: one, it doesn’t seem to have involved the civilian principals; two, taking Ludhianvi to North Waziristan is one thing, having Fazlur Rehman Khalil as part of the visiting delegation quite another. The difference should be obvious.

It would have been a more truthful, admirable and effective strategy to define the State’s own ideology, how it differs from that of these vicious sectarian outfits and then to win the hearts and minds of citizens to fight alongside their State, from moral high ground. Unnecessarily duplicitous complicated strategies are wrong-headed.

Seconding Imran sb.’s who has said this so succinctly. The answer to bigotry can’t be more bigotry.