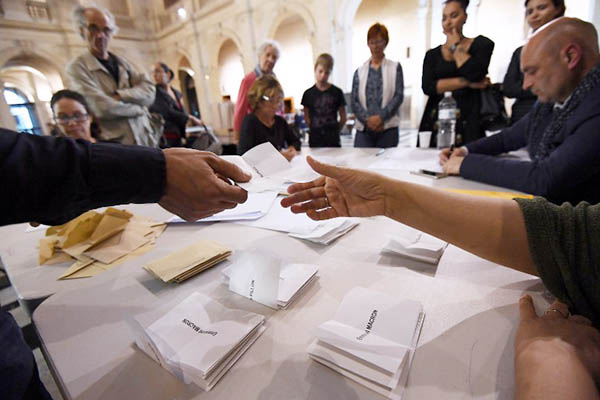 Pro-European Emmanuel Macron is set to face far-right candidate Marine Le Pen in France’s presidential run-off, results showed on Monday, making him a clear favorite to emerge as the country’s youngest leader in its history.

Macron topped Sunday’s first round with 23.9 percent of votes, slightly ahead of National Front (FN) leader Le Pen with 21.4 percent, according to near-final results from the interior ministry. They will contest the run-off on May 7.

“For months and again today I’ve heard the doubts, the anger and the fears of the French people. Their desire for change too,” 39-year-old Macron told thousands of cheering supporters in Paris. He pledged to unite “patriots” behind his agenda to renew French politics and modernize the country against Le Pen and “the threat of nationalists.”

The euro rose sharply against the dollar as fears of France pulling out of the single currency and European Union receded following the breakthrough of Macron, former economy minister under outgoing Socialist President Francois Hollande.

An ex-investment banker whose marriage to his former schoolteacher has fascinated France, Macron said the results were a clear rejection of traditional parties. Neither candidate from the mainstream Republicans and Socialists made it through to the second round for the first time in six decades, in a stunning shakeup of national politics.

“The challenge is to break completely with the system which has been unable to find solutions to the problems of our country for more than 30 years,” Macron said, already eyeing crucial parliamentary elections in June.

The outcome capped an extraordinary campaign in a deeply divided and demoralized France, which has been hit by a series of terror attacks since 2015 and remains stuck with low economic growth.

Le Pen hailed a “historic vote” in front of her supporters, adding: “The first stage has been passed.”

Macron, who had never before stood for election and only started his grassroots centrist movement 12 months ago, will go into the run-off as the clear frontrunner. New polls released on Sunday evening showed pro-business Macron easily beating Le Pen, who has hardened her anti-immigration and anti-Europe rhetoric over the last week.

The French vote was being closely watched as a bellwether for populist sentiment following the election of Donald Trump as U.S. President and Britain’s vote to leave the E.U.

Throughout the campaign, Macron insisted France was “contrarian”—ready to elect a pro-globalization liberal at a time when rightwing nationalists are making gains around the world. “It’s a victory for openness, social-mindedness,” Macron supporter Marie-Helene Visconti, a 60-year-old artist, told AFP at his election party where the E.U. flag was waved alongside the French tricolor.

Le Pen follows in the footsteps of her father Jean-Marie, who made it through to the 2002 presidential run-off in what came as a political earthquake for France. Le Pen Senior went on to suffer a stinging defeat when mainstream parties closed ranks to keep him out.

Though Le Pen came in behind Macron, there was joy at the FN’s election party in Henin-Beaumont, a former coal mining town in northern France, with outbursts of the Marseillaise national anthem. Le Pen said the second round would be a battle over France’s future, with her vision of a France out of the E.U. and behind reinforced borders radically different from her opponent’s.

“The major issue of this election is runaway globalization, which is putting our civilization in danger,” she told supporters. “Either we continue on the path of complete deregulation, with no borders and no protection… mass immigration and free movement of terrorists… or you choose France,” she added.

Far-right expert Nonna Mayer at Sciences Po university said a Le Pen victory was not impossible, “but it seems unlikely that she will carry the second round.”

“If she wins, it will obviously be an anti-Europe, protectionist, exclusionist line that wins and which could have troubling consequences for Europe and France,” she added.

Despite Macron’s plans to “relaunch the building of Europe,” the combined scores of staunch Euroskeptics Le Pen, far-left Jean-Luc Melenchon and nationalist Nicolas Dupont-Aignan add up to around 46 percent.

Macron also drew immediate support from his defeated rivals from the Socialists and Republicans. Socialist Benoit Hamon, projected to win a humiliating 6.4 percent, said the left had suffered a “historic drubbing” but urged voters to keep out Le Pen who he said was “an enemy of the republic.” Scandal-hit Republicans candidate Francois Fillon followed suit, saying: “There is no other choice than voting against the far-right.”

Fillon was seen as a favorite until January when his campaign was torpedoed by allegations that he gave his British-born wife a fictitious job as his parliamentary assistant. He was on course Sunday to score 20 percent.

Support for Communist-backed Melenchon, meanwhile, had surged in recent weeks on the back of assured performances in two televised debates. He was on course for around 19.6 percent of the vote, underlining the strength of anti-establishment sentiment.

The vote took place under heavy security after Thursday’s killing of a policeman on Paris’s Champs-Elysees avenue claimed by the Islamic State group. With France still under the state of emergency imposed after the Paris attacks of November 2015, around 50,000 police and 7,000 soldiers were deployed to guard voters.

Thursday’s shooting was the latest in a bloody series of attacks that have cost more than 230 lives since 2015. Nearly 47 million people were eligible to vote in the Eurozone’s second biggest economy and turnout was forecast to be high at around 78 percent.