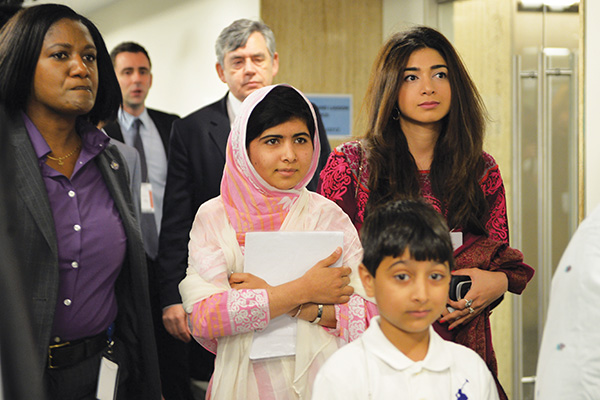 Nine months after the Taliban shot her in the head, Malala Yousafzai celebrated her 16th birthday by addressing the U.N. Youth Assembly in New York on “Malala Day.” In a speech heard around the world, Malala said “weakness, fear and hopelessness died” the day she was attacked in Swat. In her home country, Malala’s star turn elicited mixed emotions. “Good speech by Malala! Could have been better—seemed to be written for global consumption (& tried to please everyone at home and abroad),” tweeted Shahbaz Sharif, chief minister of the Punjab. Adnan Rasheed, a former Air Force officer whom the Taliban sprang from jail in Bannu last year, wrote an open letter to Malala three days after her speech, accusing her of being misled and exploited by those around her, including former British premier Gordon Brown. In the letter, which mixes conspiracy and compassion, Rasheed says all his “emotions were brotherly for you because we belong to same Yousafzai tribe.” He writes that she wasn’t attacked for championing education, but for vilifying the Taliban at the behest of others. Schools were targeted, he says, because the Army and locals were using them to shelter anti-Taliban forces. In the end, he implores Malala “to come back home, adopt the Islamic and [Pakhtun] culture, join any female Islamic madrassah near your hometown, study and learn the book of Allah.”