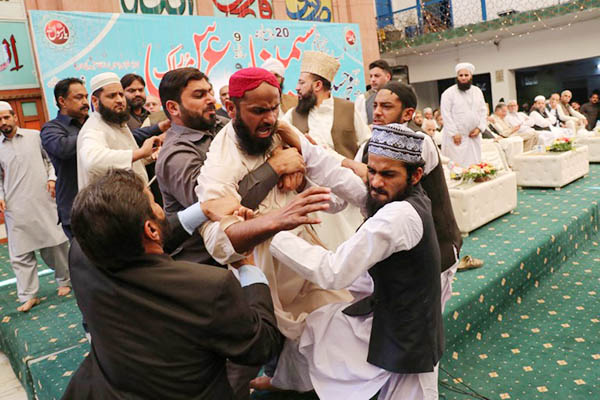 A madrassa student hurled a shoe at ousted prime minister Nawaz Sharif on Sunday, an act considered a major insult in the country.

Sharif, who was ousted last year over graft charges, appeared visibly shocked as the shoe hit his shoulder while he was addressing a gathering at a madrassa in Lahore.

The incident came a day after a separate individual hurled ink at Foreign Minister Khawaja Muhammad Asif, a member of the ruling party and a close Sharif aide, while he was speaking at a party rally in Sialkot.

The shoe hurling was broadcast live on Pakistani TV channels. In the Muslim world, such a gesture is considered particularly insulting.

The perpetrator then jumped on stage where Sharif was standing and began chanting before he was overpowered by the crowd and handed over to the police. According to police officials, the man is a student at the madrassa.

Minutes later, Imran Khan, leader of the Pakistan Tehreek-e-Insaf opposition party and an arch rival of Sharif who has frequently criticized the former prime minister, condemned the incident. “This is not the way to express yourself and I condemn whoever did it,” Khan said.

Sharif, a three-time prime minister, was ousted by the judiciary in July 2017 over corruption charges which he is currently facing in Pakistani courts.