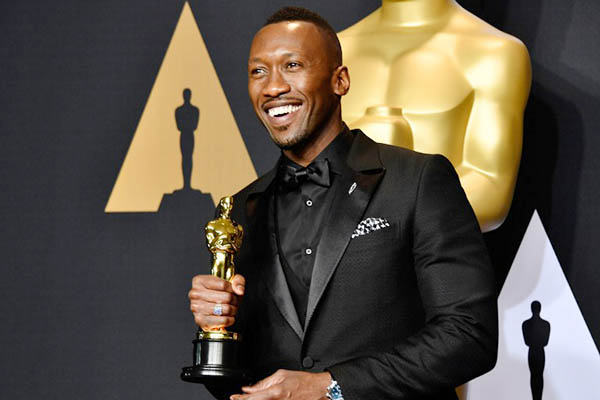 First-time nominee was heavily backed to win for memorable role in ‘Moonlight.’

Heavily backed favorite Mahershala Ali won the best supporting actor Oscar on Sunday for his portrayal of a drug dealer in coming-of-age drama Moonlight—becoming the first Muslim film star to pick up a golden statuette.

A first-time nominee, the 43-year-old actor saw off competition from Britain’s Dev Patel, veteran U.S. actors Jeff Bridges and Michael Shannon and newcomer Lucas Hedges. “I want to thank my teachers, my professors,” Ali said. “One thing that they consistently told me… ‘It’s not about you. It’s about these characters. You are a servant. You’re in service to these stories and these characters’.”

He thanked his fellow cast members—and his wife, who gave birth to their first child, a baby girl, just days earlier.

Barry Jenkins’s Moonlight tells the life story of a young African-American struggling to find his place as he grows up in a rough neighborhood of Miami. In a brief but acclaimed performance, Ali’s drug dealer Juan imparts life lessons to the protagonist Chiron that help him survive in prison and in the outside world.

The role won Oakland-born Ali best supporting actor at the Screen Actors Guild Awards, although he lost out to Aaron Taylor-Johnson Nocturnal Animals at the Golden Globes.

Ali, a Muslim convert since 1999 with a Christian minister for a mother, joined the minority Ahmadiyya Community, a movement seen as heretical by other Islamic sects, in 2001. Muslims have won Oscars in various categories over the years—including Pakistani documentary filmmaker Sharmeen Obaid-Chinoy and feature director Asghar Farhadi—but none has taken a statuette for acting.

Ellen Burstyn, who won a best actress Oscar in 1975, has practiced a blend of Sufism and other religions since her late 30s but has said she considers herself a “spirit open to the truth” rather than a Muslim.

Ali recently told Britain’s Radio Times magazine that he discovered he was on an FBI watch-list after the September 11, 2001 attacks. “If you convert to Islam after a couple of decades of being a black man in the U.S., the discrimination you receive as a Muslim doesn’t feel like a shock,” he said. “I’ve been pulled over, asked where my gun is, asked if I’m a pimp, had my car pulled apart. Muslims will feel like there’s this new discrimination that they hadn’t received before—but it’s not new for us.”

Born Mahershalalhashbaz Gilmore—he was named after a child of the biblical prophet Isiah—and raised near San Francisco, Ali studied mass communications at St. Mary’s College of California. He made his professional debut performing with the California Shakespeare Festival and, soon after, earned a master’s degree in acting from New York University.

His first major movie role was in David Fincher’s 2008 fantasy drama The Curious Case of Benjamin Button, opposite Brad Pitt and Cate Blanchett.

Ali and his wife Amatus Sami-Karim have a cat called Nas, named after the U.S. rapper.