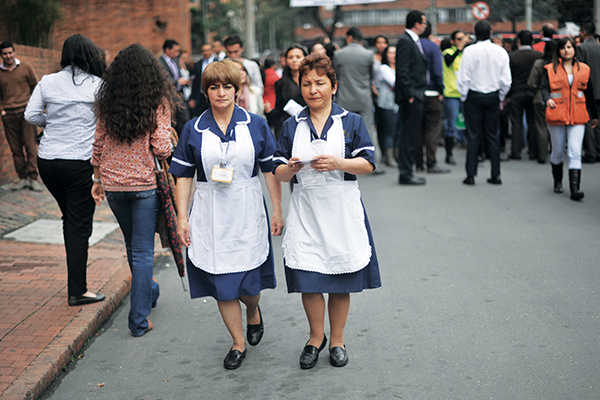 A new law is designed to move those downstairs upward.

[dropcap]C[/dropcap]omplaining about the hired help in Brazil is as old as the New World. And yet like the nightly telenovela, where the storyline often turns on maids and masters, the comfortable classes can’t seem to do without their household staff. No country has more domestic servants than Brazil: some 7.2 million, according to a recent report by the World Labor Organization (or 6.6 million, according to Brazilian government figures). By contrast, India, with five times the population, has 4.2 million paid servants, while the mighty United States employs just 667,000. So it was no surprise that when the legislature recently passed a constitutional amendment granting new rights for millions of domestics, the national chatter in Brazil grew shrill—upstairs and down.

The new law and the tumult it has created say a great deal about the impressive transformations, and growing pains, sweeping Latin America’s emerging giant. The law, modestly enough, puts maids, nannies, governesses, gardeners, and drivers on equal footing with wage earners in the general workforce. And yet Brazilian hearth and home may never be the same. While domestics once worked unlimited hours, drew paltry benefits, and could be fired for a trifling, now they are entitled to a maximum eight-hour workday, a month’s paid vacation, and a 50 percent bonus for overtime. In addition, employers are hit with a fat fine when they dismiss their workers without cause. Labor leaders, scholars, and politicians hailed the law, which passed without a single dissenting vote, as a second emancipation. “Today we are closing down the last slave quarters and throwing away the key,” intoned President of the Senate, Renan Calheiros.

That was a barbed reference to Brazil’s inglorious past. No country in the Western hemisphere imported more slaves (4 million) or held them longer (till 1888) than did Brazil. In some ways, the housemaid is the living symbol of a land just 125 years out of bondage. And yet the modern Brazilian domestic is not just a slave with a cellphone. In fact, as Brazil has prospered, the number of domestics has grown from 3.7 million in 1996 to about 7 million today. Behind the boom is a demographic upheaval that is dramatically reshaping the country.

More than 23 million Brazilians have climbed out of poverty during the last decade. Once frail and few, the middle class now makes up the majority of the population. The new Brazil is not just wealthier but also more equitable. While the top 10 percent of society grew 16 percent richer in the past decade, the poorest tenth saw their earnings jump 94 percent. “Brazil is one of the few countries in the world where inequality is shrinking,” says Marcelo Neri, a social-policy expert who heads Brazil’s leading economic-policy think tank, IPEA.

As aspiring middle-class women have taken jobs in shops, offices, and factories, the demand for nannies and house cleaners has soared. At the same time, yesterday’s maids want maids of their own. That means it’s a seller’s market for those still in the homemaking business.