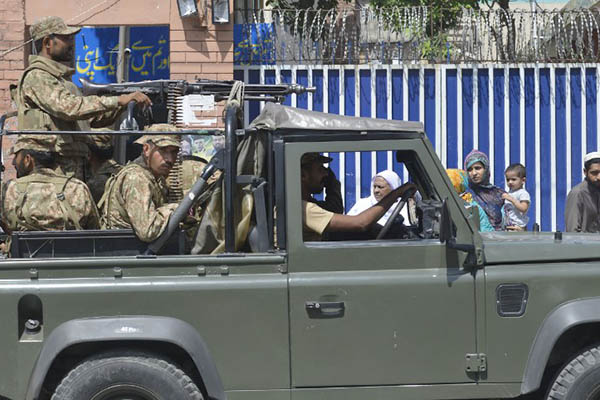 Army chief General Qamar Javed Bajwa was forced to deny any military interference in the NA-120 by-polls after ousted prime minister Nawaz Sharif’s daughter Maryam Nawaz hinted that the Army had tried to play spoiler in the contest. During a meeting with defense committees of the National Assembly and Senate at General Headquarters in Rawalpindi, he dismissed rumors of the Army’s alleged role in the Panama Papers case as unfounded and said “the military had no role in ex-prime minister Nawaz Sharif’s ouster”; and that, for him, “the current prime minister is as good as the previous one.”

Despite these claims, there is no denying that “disappearances” have happened. Earlier this year, “liberal” bloggers were picked up in Islamabad and released after chastisement—the victims refusing to identify the people who had kept them captive. Similar “disappearances” reportedly happened during polling in Lahore, where one of the “disappeared”—abducted after being blindfolded with a black cloth according to Maryam Nawaz—has returned but again refuses to divulge who the kidnappers were. Maryam’s revelations apparently proved so worrisome that PMLN stalwart and Railways Minister Khwaja Saad Rafique was forced to step in and ask her to cool down.

The turnout at the polls was predictably low and Kulsoom Nawaz of the Pakistan Muslim League (Nawaz) won equally predictably, but there were surprises nonetheless. Two extreme religious parties—the leader of one being on the United Nations’ internationally designated terrorists list—came out third and fourth: the Milli Muslim League (MML) and the Labbaik Ya Rasulallah. They entered the contest under a scheme former general Amjad Shuaib had hinted at on TV as a way of “mainstreaming” the proxy warriors Pakistan had used earlier. The MML leader told TV channels that he represented the Difa-e-Pakistan Council (Defense of Pakistan Council) headed currently by Maulana Samiul Haq and founded by the late former ISI chief, General Hamid Gul. Pathetically, the Pakistan Peoples Party polled only 1,414 votes against the MML’s 5,822. Ignored stubbornly by the former interior minister, who often met rightwing leaders in his office, the mainstreaming has finally begun.

The role of agencies in criminality such as abductions has become an accepted fact of life in Pakistan. Even the notorious ex CJP Chaudhry was unable to make any headway in bringing agencies under public accountability.