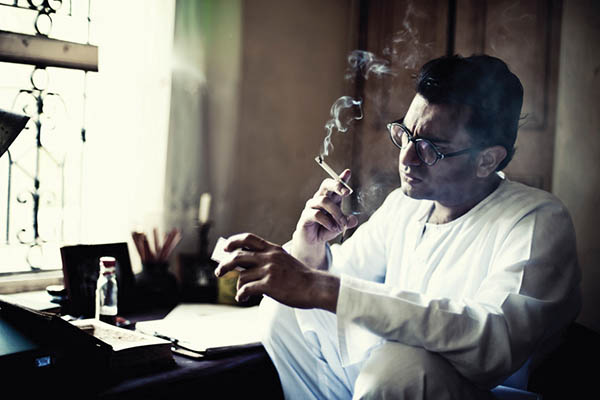 In conversation with Sarmad Khoosat.

Last year, his film Manto won in the Best Feature Film category and he took home the Best Actor award at the 8th Jaipur International Film Festival. On the eve of the fifth Lahore Literary Festival (LLF), we spoke with director-actor-writer Sarmad Khoosat, 37, about the making of his critically and commercially acclaimed film about one of Pakistan’s most misunderstood literary figures. Excerpts:

How did you prep for the role of Saadat Hasan Manto?

Manto interspersed a lot of autobiographical material throughout his work. He talked a lot about his body language and thoughts. That way we had a framework to work with. It was tough to flesh out someone so distant and mythologized. I wanted to render a coherent character who has a million things happening to him—alcoholism, alleged mental illness, and the kind of storied visceral reaction he had to Partition. His voice was crucial. It’s a shame there are no recordings of him despite the fact that he worked in radio and did some small bits in film. There was a lot of ambiguity in Manto’s life. We toned it down in some places and dramatized it in others.

What surprised you about him?

For the sake of narrative convenience, Manto is often turned into a two-dimensional character very angry about things, always writing about or indulging in alcohol, but there was so much more to him. He used to photograph his wife, pick out clothes for her, and even pluck her eyebrows. He could chop vegetables and deseed pomegranates better than anyone, he had an obsessive compulsion for clean feet, and he would braid his daughters’ hair. He never spoke a full sentence in Urdu—that, for me, was a complete revelation. The film sought to present an unvarnished, all-too-human Manto. I wanted audiences to believe in his genius despite his flaws, which have tended to overshadow his work. If the Subcontinent can digest and glorify a character like Devdas then there is certainly room for Manto. Audiences understand that here was someone who felt a lot and wanted to say a lot but found the world around him suffocating. I wanted audiences to feel sorry about what they did to him.

How did Manto’s daughters respond to the film?

They are probably the most generous people when it comes to sharing their father’s stories. They were warm and welcoming in helping me out with the research, and their response has been overwhelming. I’m sure many disagreed with my portrayal of Manto; his readers have a strong sense of ownership about him. But Nighat, his eldest, actually said that I was fantastic as “Abba Jaan.” They were also very happy with the way Sania Saeed portrayed their mother. One of them said the asylum scenes were far different from reality, but that they worked beautifully as part of the whole. She said: “And why not? If Abba Jaan actually wrote so many stories, his own life should be treated like a story.” They take rightful pride in the legacy he has left behind and if there’s any celebration of Manto, they want to be a part of it.

The opening sequence is quite suggestive, as is the subtext of some of the scenes. Were you surprised the film passed the censors?

Surprised? We were shocked it made it to the cinemas without any cuts. For cinematic and narrative reasons, the film confidently declares from the outset that he was vulgar. Stating that upfront takes away the cudgel that has been used so often and so self-righteously to denude his genius of acknowledgement and diminish the greatness of his works. But look at some of what’s run on television in the form of advertisements for hair-removal creams and juices and whatnot. That’s plenty suggestive. Our opening scene was subtle, even if it is somewhat risqué.

How do you imagine Manto would have reacted to your film?

His last wish, which wasn’t honored for whatever reason, was to have the following words engraved on his tombstone: “Weighed down by the Earth, he wonders still: Who was the greater storywriter, God or he?” I thought I would do this for Manto. You can see this epitaph etched on the headboard in the last scene of the picture. I think he would be happy about that.