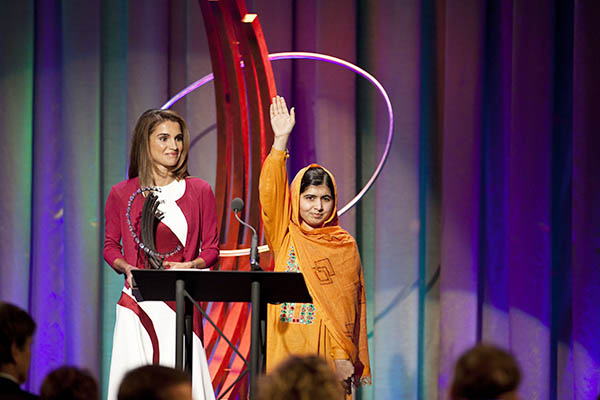 With a maturity and poise that belied her tender years, Malala Yousafzai, the Pakistani teen shot by the Taliban for championing girls’ education stood by world leaders on Wednesday and called for books not guns.

“Instead of sending tanks send pens,” she urged, her hair modestly covered by a scarf as she took part in the first anniversary of the Global Education First initiative at the United Nations in New York.

In October last year, Malala was shot in the head by a Taliban gunman as she was on her way to school in her usual bus in an attack that drew worldwide condemnation. Gravely wounded and close to death, the Pakistani schoolgirl was flown to Britain for surgery. She returned to school in England last March, after recovering from her injuries. Now she has become a global advocate for the right of all children, and in particular girls, to have a proper education.

According to the United Nations, some 57 million children around the world of elementary school age are denied an education—and 52 percent of them are girls.

It was not Malala’s first trip to the United Nations building in New York. Earlier this year in July, she received a standing ovation for an address to the general assembly at which she vowed she would never be silenced.

“We want women to be independent … and to have equal rights as men have,” Malala said on Wednesday. “We believe in equality and to give equality to women is justice,” she added, receiving resounding applause. “We are here to find a solution for all these problems that we are facing.”

U.N. chief Ban Ki-moon hailed the teenager for “your courage and triumph” which he said “have inspired millions of people across the world.”

Malala’s courage has already won her numerous awards including the highest honor from Amnesty International, which announced she would be named an Ambassador of Conscience.

Time magazine also listed her as one of the 100 most influential people in the world, and she has just been nominated for the prestigious European Parliament Sakharov Prize.

Next month her book I am Malala is due to be published and she has also launched an organization called the Malala Fund.