Malala Looks to the Future 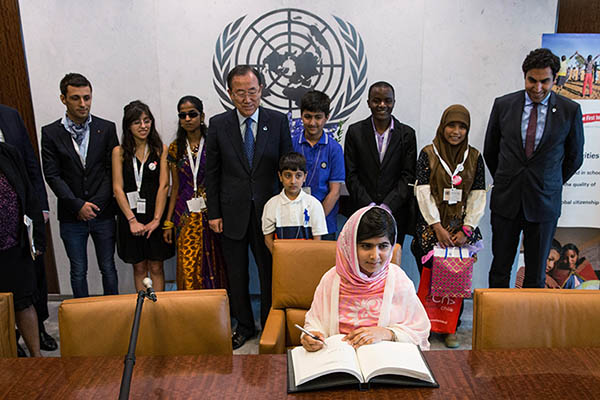 Pakistani activist says she does not want to be known as the girl who was shot by the Taliban.

Teen activist Malala Yousafzai said Saturday that she does not want to be known as the girl the Taliban tried to kill, but rather as “the girl who struggled for her rights.”

A day after making a speech at the United Nations, the 16-year-old said she would devote her life to the education of girls. The U.N. Youth Assembly appearance was Malala’s first public speaking engagement since a Taliban gunman shot her in the head last October.

The teenager, considered a strong candidate for the Nobel Peace Prize, said she was determined to keep her struggle “for a right to live in peace, for a right to go to school.” But she reaffirmed her message that the Taliban and other extremists “do not understand the importance of education.”

The Taliban were among “people who think that when a woman goes to school she will be empowered, and they are afraid of it,” she emphasized.

“They are still targeting schools, they are still killing innocent children,” she said, referring to recent attacks both in her native Pakistan and Nigeria. “If we work together, we will soon see that there will be many schools created in Pakistan and Afghanistan and poor countries. And we will see that every woman and every girl will have the same rights as men have,” she said. “We do want equality, we are not like men,” she added.

Malala is expected to return to New York for a summit on education on the sidelines of the U.N. General Assembly of world leaders in late September. “Malala’s speech was just the start of a momentous push for change in the run up to 2015, to deal with the education emergency,” said Gordon Brown, the former British prime minister and now U.N. Special Envoy on Global Education.

Getting all children into primary school by 2015 was one of the Millennium Development Goals agreed at a world summit in 2000.