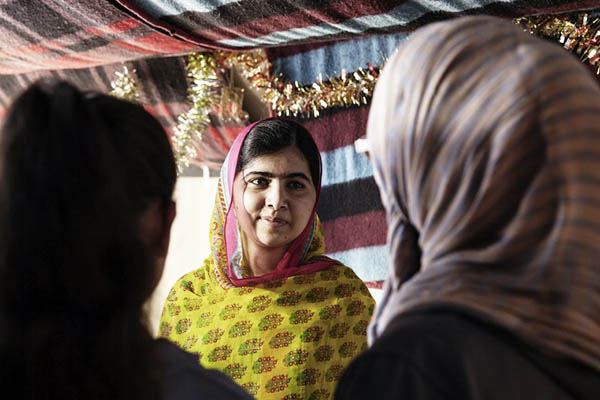 Malala Yousafzai told world leaders they were failing Syria’s children, as the Nobel Peace Prize winner spent her 18th birthday on Sunday on the Syrian border.

As she became an adult, the teenager, who was shot by militants in Swat for campaigning for girls’ rights, opened a school for more than 200 Syrian girls living in refugee camps in Lebanon’s Bekaa Valley. The Malala Yousafzai All-Girls School will offer education and skills training to girls aged 14 to 18.

“I am honored to mark my 18th birthday with the brave and inspiring girls of Syria,” Yousafzai said in a statement received in London. “I am here on behalf of the 28 million children who are kept from the classroom because of armed conflict. Their courage and dedication to continue their schooling in difficult conditions inspires people around the world and it is our duty to stand by them. On this day, I have a message for the leaders of this country, this region and the world: you are failing the Syrian people, especially Syria’s children. This is a heartbreaking tragedy—the world’s worst refugee crisis in decades.”

Yousafzai later met with Lebanese Prime Minister Tammam Salam at his home in Beirut, accompanied by her father and Noura Jumblatt, head of the Kayany Foundation who invited her to visit. “Syrian children are suffering the most, being refugees for more than four years, deprived of education,” Yousafzai told BBC News. “The worst thing is that the international community and world leaders are not paying attention and that’s what drives me to come here and celebrate my birthday and to say to world leaders: you need to focus on it and you need to invest here, otherwise it will be a generation lost.”

Lebanon is hosting nearly 1.2 million registered Syrian refugees, though the total number in the country may be even higher. The influx has placed strains on Lebanon, which has just four million citizens.

The Lebanese government has prevented the establishment of official refugee camps, giving rise to informal shanties known as “tented settlements” in rural areas.