Home Scope Malala Vows Not to Be Silenced

Malala Vows Not to Be Silenced 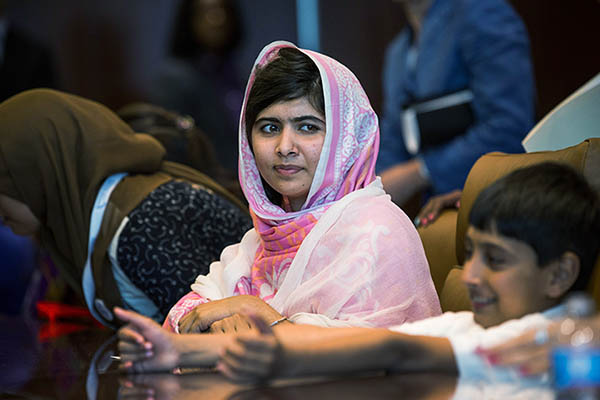 In a speech at the U.N., teenage activist says education is the only weapon that can defeat the Taliban.

Teenage activist Malala Yousafzai vowed Friday not to be silenced by terrorists in a speech to the United Nations on her first public appearance since being shot by the Taliban.

“They thought that the bullet would silence us, but they failed,” Malala said on her 16th birthday in a presentation in which she called for books and pens to be used as weapons. “The terrorists thought that they would change my aims and stop my ambitions, but nothing changed in my life, except this: weakness, fear, and hopelessness died. Strength, power, and courage was born,” she said.

Her 20-minute speech was well received. Malala, who wore a pink headscarf and a shawl that belonged to assassinated Pakistan Peoples Party leader and former prime minister Benazir Bhutto, insisted she did not want “personal revenge” against the Taliban gunman who shot her on a bus in the Swat Valley in October last year.

“I want education for the sons and daughters of the Taliban and all the terrorists and extremists. I do not even hate the Talib who shot me. Even if there is a gun in my hand and he stands in front of me I would not shoot him.” But Malala said that “the extremists were and they are afraid of books and pens, the power of education. The power of education silenced them. They are afraid of women.” She said: “Let us pick up our books and pens. They are our most powerful weapons. One child, one teacher, one pen and one book can change the world. Education is the only solution.”

The advocate for girls education was shot in the head by a Taliban gunman as she rode on a school van near her home. She was given life-saving treatment in Britain, where she now lives, but the attack has given new life to her campaign for greater educational opportunities for girls. Malala is now considered a leading contender for the Nobel Peace Prize.

Gordon Brown, the former British prime minister and U.N. special envoy for education, hailed Malala as “the bravest girl in the world” as he presented her at the U.N. Youth Assembly. Brown said it was “a miracle” that Malala had recovered to be present at the meeting. U.N. leader Ban Ki-moon and other top officials also hailed her achievements.

The speech in which Malala invoked the legacy of Martin Luther King, Nelson Mandela, and other legendary peace advocates brought praise. Malala also thanked British doctors and nurses for the care they had given and the United Arab Emirates government for paying for her treatment.

“I cannot believe how much love people have shown me. I have received thousands of good wish cards and gifts from all over the world. Thank you to all of them. Thank you to the children whose innocent words encouraged me,” she said.

Courage and. Compsed Malala done grat at UN. But only education will not change the society. Here we need high and liberal education. Imrovment in living standar and more social indicators needs to be improved.