Malala Wants to Lead Pakistan to ‘Save’ the Country 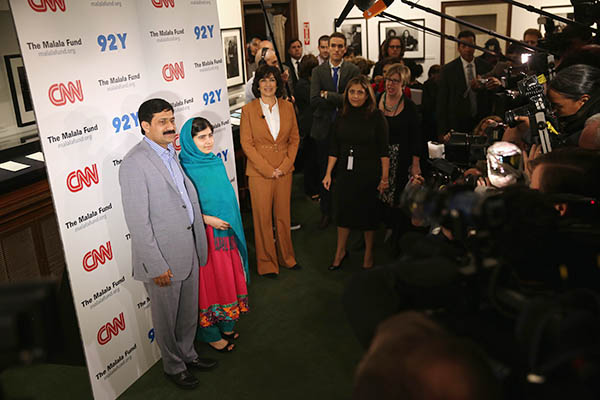 Teenaged activist praises former Nobel Prizewinners, including physicist Abdus Salam, as she declares it a great honor if she wins.

Teenage rights activist Malala Yousafzai told an audience in New York Thursday that she would like to become prime minister of Pakistan to “save” the country.

In an interview with CNN’s Christiane Amanpour at a sold-out public event, she also said winning Friday’s Nobel Peace Prize would be a “great honor.”

Asked about her conflicting dreams of becoming a doctor or a politician, and whether she would like to become premier, Malala said she wanted to help her homeland. “I want to become a prime minister of Pakistan,” she told Amanpour to cheers from the audience. “I think it’s really good because through politics I can save my whole country,” she added.

“I can spend much of the budget on education and I can also concentrate on foreign affairs.”

Malala was shot in the head by the Pakistani Taliban on Oct. 9, 2012, for speaking out against them, demanding that girls have the right to go to school. She was flown to Britain for specialist care and made a remarkable recovery, going on to become a global ambassador for children’s rights.

The 16-year-old has written an autobiography, addressed the United Nations and set up the Malala Fund.

The real prize, she said, would be to see every child, black or white, Christian or Muslim, boy or girl, go to school and “for that I will struggle and work hard.”

She paid tribute to previous Nobel laureates, including scientist Abdus Salam who in 1979 won the prize for physics—Pakistan’s only Nobel to date.

“Everyone who has got a Nobel prize, they deserve it but when I think of myself I think I have a lot to do,” she told Amanpour.

The Pakistani Taliban have threatened to try to assassinate her again and security was tight for her public event in New York late Thursday. “They can only shoot a body, they cannot shoot my dreams,” Malala said.

Her appearance coincided with the International Day of the Girl Child.

According to UNICEF, around one in three females in the developing world are forced to marry as a young teenager or child, making them more likely to leave school early. Providing mothers with even just a primary education could save 1.7 million children from stunted growth and malnutrition each year, the United Nations says.

While I admire Malala for her courage and stand and all accolades to her determination. She indeed is a very brave and able person a pride for Pakistan. But I would also like to know her impressions and feelings about the hundreds of innocent boys and girls killed or injured in the US Drone attacks. Has she ever made an effort to enquire about how the surviving injured children managed following the Drone attacks!!! For that matter has anyone in the foreign media made any effort to enquire about the plight of the innocent women and children? Or does Malala and her PR team feel that those children deserve this fate.. and do they think that it is fair that these children should be punished for the sins of their fathers????

Another saviour alongside the USAID!!! I wish the media would stop playing the USAID CLIP… It is not only sickening but ridiculous too. Look at our super rich PM and Ex President and all the other industrialists who supposedly have stashed 1500 Billion Dollars in Swiss banks alone… and here is the media making pathetic degrading efforts to show gratitude to the very country that has immersed us in a never ending conflict of life and death for this state!!!

@Shahida Qureshi – Why is it that when an individual is doing so much and bringing light to this beautiful nation, we must ask them to solve all the other problems as well. Pakistan is a nation filled with beauty and yet we display the negative aspects all the time. What Malala is doing is inspiring and we should not pressure the young teenager to solve all our problems because she has the global stage. We ourselves should slowly take steps to remedy our problems. I don’t think blaming Malala and her PR team does any good, I think she is spreading awareness and raising funds for her charity and that is commendable by any means. I agree that Drone Attacks have killed many innocent people, however I think your anger is justified but your direction to who it is may be not.

Who said Malala is not the pride of Pakistan..and who is asking her to solve all the problems. It is only fair that we spare a thought for the numerous children who’s life has been cut short and who may have been maimed for life because of the Drone attacks. Is that too much to ask? Does anyone keep records of the number of children involved.. Then there are thousands of children killed injured and orphaned in Afghanistan and Iraq.. Has UN and other organisations recognised their suffering and given them space on the front pages.