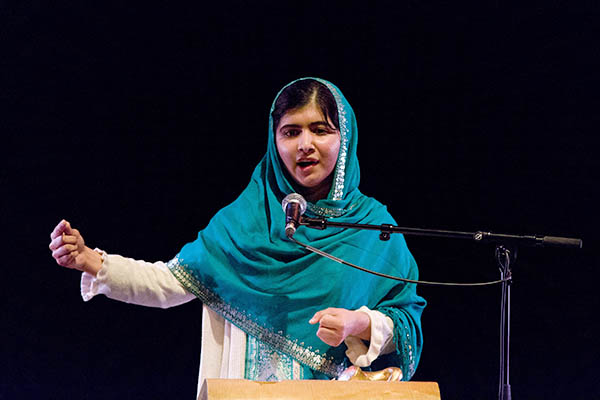 Nobel laureate will be donating her $100,000 award to help educate children in Pakistan.

Malala Yousafzai, the child rights activist and youngest ever recipient of the Nobel Peace Prize, received the Liberty Medal on Tuesday and pledged her $100,000 award to education in Pakistan.

Yousafzai won the annual prize from the National Constitution Center for her “courage and resilience in the face of adversity and for serving as a powerful voice for those who have been denied their basic human rights and liberties,” the NCC said.

The 17-year-old gave a speech outlining her desire to see the 57 million children that are currently out of school given the right to an education, speaking less than two weeks after winning the Nobel prize with India’s Kailash Satyarthi.

“I’m honored to receive this medal,” she said in an address peppered with jokes. “It encourages me to continue my campaign for education and to fight for the rights of every child,” she added, announcing the money would go toward education in Pakistan.

She called on countries around the world to stop spending money on weapons and instead invest in their children’s futures. “Education is the best weapon through which we can fight poverty, ignorance and terrorism. So I ask all countries all around the world, let us say no to wars.”

The schoolgirl, who currently lives in Britain, rose to prominence in Pakistan by campaigning for girls’ right to education. In October 2012, she was shot in the head by a Taliban gunman and is regarded with suspicion and hatred among many in Pakistan.

Evacuated to Britain, she made a remarkable recovery and today attends school and flies around the world to champion for universal access to education through her Malala Fund charity.

“Malala’s courageous fight for equality and liberty from tyranny is evidence that a passionate, committed leader, regardless of age, has the power to ignite a movement for reform,” said NCC chairman Jeb Bush. “Let us all, young and old, strive to be like Malala—to challenge the status quo and to serve as catalysts for meaningful change.”

The Liberty Medal is awarded to people who strive to secure freedom for people around the world. Past recipients include former presidents George H. W. Bush and Bill Clinton, Nelson Mandela, Shimon Peres, Kofi Annan and Bono.