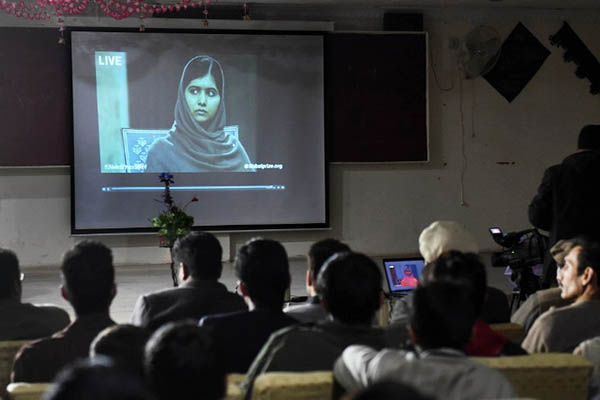 P.M. Sharif vows that the education activist’s dream for girl’s education ‘shall be realized.’

Hundreds of supporters in Malala Yousafzai’s hometown cheered as they watched their heroine accept her Nobel Peace Prize on Wednesday, as Prime Minister Nawaz Sharif promised the activist’s dream for girls’ education would come true.

Students, activists and teachers gathered in a school hall in Mingora to watch the ceremony, chanting “Long live Malala” and continuing to give her a standing ovation for several minutes. Security was tight around the town, as soldiers and police patrolled the streets and conducted searches on every vehicle entering and leaving. Though acclaimed for her work abroad, many conservative Pakistanis view Yousafzai with suspicion and are critical of her airing the country’s problems abroad.

Sharif gave his congratulations to both Yousafzai and Indian child rights campaigner Kailash Satyarthi, who shares this year’s Peace Prize with the 17-year-old. “The dream of Malala regarding girls’ education shall be realized,” Radio Pakistan quoted Sharif as saying.

Shot in the head by Taliban militants two years ago, Yousafzai’s comeback has transformed her into a global icon of girls’ education.

At the ceremony, residents distributed sweets among themselves in front of giant banners stating “You are the pride of Pakistan” and “Congratulations Nobel Laureate Malala Yousafzai.”

But one of the event’s organizers, Ahmad Shah, admitted that the turnout was relatively muted because some residents “have spread a negative image of Malala.”

Most government and private schools in Swat began the day with prayers and well wishes for Yousafzai.

The teenager first rose to prominence through a blog she kept during a period when the Pakistani Taliban controlled her region, from 2007 to 2009. Girls’ schools were razed, music and dance was banned, and those that dared challenge the authority of the militants were executed publically in Mingora’s main square.

Adina Ali, an 11-year-old student, said that she was inspired by Yousafzai’s struggle. “Malala raised her voice for education at a time when girls’ education was banned,” Ali said. “It is because Malala received a Taliban bullet in her head that the girls of Swat are going to school.”

Though Wednesday’s ceremony was fairly low-key, organizer Ahmad Shah said most people silently supported her cause. “Some people are jealous that a girl from a conservative society has risen up and they are not accepting it,” he said. “But we know that the silent majority are with Malala, they like her and support her.”

Some 25 million children aged five to 16 in Pakistan are out of school—14 million of them girls, according to education campaign group Alif Ailaan. Experts say chronic underinvestment, dilapidated infrastructure and underage marriage of girls are to blame.