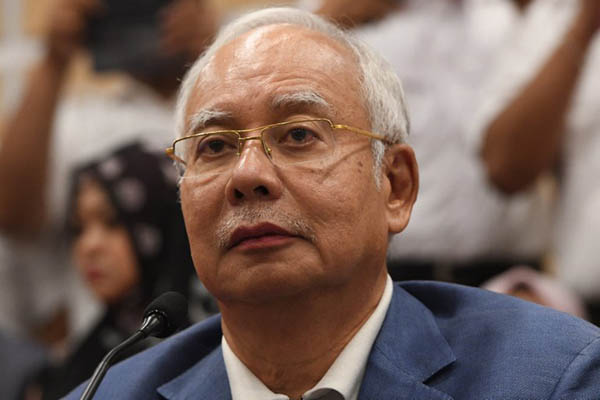 Malaysia’s scandal-ridden former leader Najib Razak was hit with a travel ban on Saturday as speculation mounted he was about to flee the country following his shock election loss, in a possible bid to avoid prosecution over a massive financial scandal.

An angry crowd had gathered at a Kuala Lumpur airport, shouting at vehicles and seeking to stop them entering, after a flight plan leaked online showed Najib and his unpopular wife Rosmah Mansor were planning to fly to Indonesia.

The defeat of Najib’s Barisan Nasional (BN) coalition in last week’s poll by an alliance led by his one-time mentor Mahathir Mohamad was a political earthquake, which toppled an increasingly authoritarian regime that had ruled the country for six decades.

At 92, Mahathir is the world’s oldest state leader. He previously served as prime minister for over two decades, and was himself accused of ruling with an iron fist.

Speculation had been mounting that Najib, who has been embroiled in a massive scandal related to state fund 1MDB, might try to flee the country as Mahathir has pledged to investigate the controversy. As the image of the leaked manifest for a flight to Jakarta spread like wildfire online, Najib insisted in social media posts he was planning only a “short break” overseas to rest after the election and would be back next week. But anger quickly mounted among social media users who accused the defeated leader of seeking to flee, and the immigration department swiftly announced both he and Rosmah were banned from leaving Malaysia.

Najib said in a tweet: “I have just been informed by the immigration department of Malaysia that my family and I are not allowed to go abroad. I respect the decision and I will remain in the country with my family.”

Rosmah has long been a lightning rod for public anger in Malaysia due to her reported love of luxury shopping trips and vast collection of designer handbags. Her openly spendthrift ways have been galling for ordinary Malaysians who increasingly complain of soaring living costs, particularly after Najib’s government introduced an unpopular sales tax in 2015.

Earlier, as dozens of people descended on the airport in a bid to stop them leaving, riot police were stationed by the gate of the airport where it was believed Najib would enter. As a white van with heavily tinted windows attempted to pass by, the crowd surrounded the vehicle and demanded it be opened so they could see who was inside. They tried to rock the vehicle and one man shouted “I hate Rosmah.” It was only allowed to pass after those inside rolled down a window to prove Najib was not in the van.

Businessman Raja Singham, 49, who had tried to block the van from entering, said: “We have the right to know who is inside the car, as a citizen I will fight for that. We have suffered for so many years. I don’t want them to get out of the country.”

The U.S. State Department alleges in civil lawsuits that $4.5 billion was pillaged from 1MDB in an audacious scheme of fraud and money-laundering, and funneled to the United States where it was used to buy everything from artwork to high-end real estate. Almost $700 million ended up in Najib’s personal bank accounts, although the attorney general said it was a donation from the Saudi royal family and cleared the then-premier of misconduct.

Najib and 1MDB deny any wrongdoing.

This would pave the way for Anwar’s return to politics and to potentially become premier later. Mahathir has said he plans to eventually hand the premiership to Anwar.

Anwar was heir-apparent to Mahathir until they had a dramatic falling out. Mahathir sacked him in 1998, and he was subsequently jailed. He was released and then imprisoned again under Najib’s rule in 2015. Mahathir and Anwar reconciled in recent years in a bid to oust Najib, an extraordinary twist even by the head-spinning standards of Malaysian politics.