Man Fills Potholes Out of Love for Dead Son 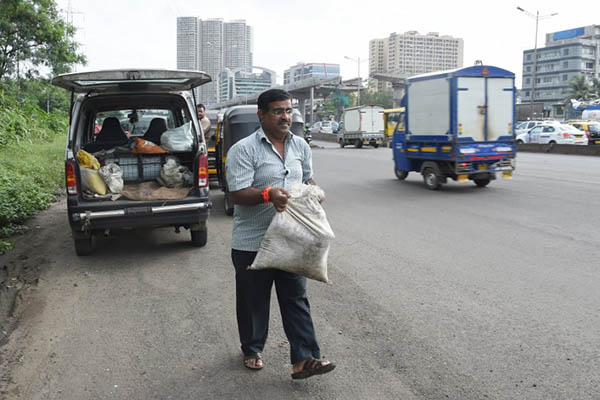 Dadarao Bilhore smoothens the road surface, rests his shovel, looks to the sky and prays for his son, one of thousands of Indians killed every year in accidents caused by potholes.

Prakash Bilhore, a promising student, was just 16 when he died in July 2015 in Mumbai, India’s hectic financial and Bollywood capital of 20 million people. To help deal with his grief, Prakash’s devastated father Dadarao decided he would do something about Mumbai’s roads, which like much of India’s, are notoriously shoddy.

Using sand and gravel collected from building sites, Bilhore has filled in almost 600 potholes across India’s financial capital in the past three years.

The 48-year-old vegetable vendor does it to pay tribute to his beloved son and in the hope that it will save lives. “Prakash’s sudden death left a huge void in our lives. I do this work to remember and honor him. I also don’t want anyone else to lose a loved one like we have,” Bilhore tells AFP at the modest apartment he shares with his wife, daughter and extended family.

Prakash Bilhore was traveling pillion when the motorbike he was on with his cousin hit a deep pothole, sending them both flying through the air.

The tragic accident occurred during Mumbai’s summer monsoon when heavy rains are blamed for causing crater-like holes on the teeming coastal city’s roads. Potholes are so common that a campaign is under way to have Mumbai featured in the Guinness Book of Records as the city with the most potholes.

Navin Lade, a resident, claims to have recorded more than 27,000 holes on the website www.mumbaipotholes.com, although local officials dispute his findings.

Government statistics show that potholes were responsible for the deaths of 3,597 people across India last year, an average of 10 a day. Citizens blame government apathy, accusing local authorities of failing to maintain roads properly.

Activists say contractors hired to repave roads do a bad job on purpose so the work will need to be done again the following year. “The government needs to take responsibility and create better infrastructure,” urges Bilhore.

He says he has repaired 585 potholes, many of them alone; others with the help of volunteers who are inspired by his story.

Bilhore has been featured in countless Indian newspaper articles and received several awards, earning him the nickname “pothole dada,” an affectionate term in India for a respected male. “Recognition of our work has given me strength to deal with the pain and wherever I go I feel Prakash is standing with me,” says Bilhore. “As long as I am alive and can walk I will get rid of all of these potholes.”