Home Lightbox Man of the People

Man of the People 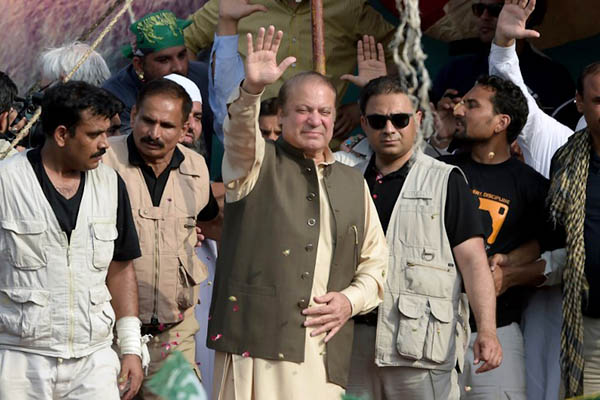 Nawaz Sharif is the latest in a long line of Pakistan’s prime ministers to see their tenure ended early. Ousted by the Supreme Court over corruption allegations raised by the Panama Papers leak, the Pakistan Muslim League (Nawaz) head’s exit has raised many questions—not least among legal experts who continue to question the dangerous precedent set by the Supreme Court in utilizing the archaic Articles 62/63 of the Constitution to declare him ‘unfit’ for office.

Unfortunately, while Sharif may be the most recent example, he’s unlikely to be the last. Pakistan’s establishment—a de facto term used for the country’s military industrial complex—does not abide dissent and any attempt by politically elected leaders to break from their dictated policy can only lead to exile—or worse.

Instead of taking the path of least resistance as he did after the 1999 military coup led by General Pervez Musharraf, Sharif opted to take his grievances to the people. There are both positive and negative views on this, chief among them the question of why the representative of the country’s ruling party even needs to resort to street agitation. However, it cannot be denied that the PMLN chief’s successful procession—from Islamabad to his native Lahore—might have served to give his political party a lifeline that many believed was gone after the Supreme Court verdict against him and his family.

Sharif was candid during his trip, admitting that his government had failed to fulfill its mandate to improve several aspects of governance in Pakistan. From legal to electoral reforms, the PMLN’s majority in Parliament gave it much leeway to fix some of the most pressing problems in the country. Its failure to address these is one of Sharif’s biggest failures. But while much of the blame must, and should, lie on Sharif’s shoulders, the serial protests launched by opposition parties were also part of the problem

The Pakistan Tehreek-e-Insaf, led by cricketer-turned-politician Imran Khan, launched a 126-day sit-in in 2014 over alleged electoral rigging—since proven false by local courts. The increasing polarization of Pakistani society was in full evidence during that period, as TV channels opted to side with either Khan or Sharif, with some even going so far to threaten the ruling government that it’s days were numbered. The PTI’s street power was also proven with its attack on state-run broadcaster PTV—and has since been used to grant Khan immunity from legal repercussions. He has yet to appear before the Election Commission of Pakistan despite the authority issuing arrest warrants for him. This stands in marked contrast to Sharif who submitted himself and his family before the Joint Investigation Team investigating his alleged corruption.

In many ways, Sharif’s ouster by the Supreme Court actually grants him freedom to speak without fear of alienating political allies and opponents. As a political leader—and not government functionary—he is now free to stage rallies across Pakistan despite being barred from holding future public office by the court’s ruling. Unfortunately, many politicians and pundits have implied Sharif and his PMLN have misused this freedom to declare “war” on the judiciary and the Pakistan Army. This does not reflect the PMLN’s internal policy, says Sharif’s daughter Maryam, who is also facing a National Accountability Bureau probe into alleged money laundering.

“[Last month’s] rallies should not be seen as anti-judiciary or any other national institution,” she tells Newsweek. “We deeply respect the judiciary and anyone suggesting otherwise is lying. We are merely going back to the public who voted us into office as is our basic right as their representatives,” she added. “It is normal for any public leader to reach out to the masses to keep apprised of the issues facing them and to reassure them that their voices are being heard.”

By all accounts, Sharif’s rallies were a success with his supporters. Chants of “Mian Sb We Love You” were heard at every stop of his procession. It also, says Maryam, informed the public that their vote matters and should be respected by all institutions in Pakistan.

Senior PMLN leader and current interior minister Ahsan Iqbal has also spoken out in favor of Sharif’s decision to take to the streets. “[This] journey was the beginning of a new phase in Pakistani politics. The people of Pakistan must know whether their will shall be respected or dismissed as it has been in the past.”

Railways minister Khawaja Saad Rafique similarly told journalists that Sharif’s rallies were never meant to cast aspersions against the judiciary. “We were merely exercising our right to analyze the court’s verdict, not violate it,” he added.

In clear terms, Sharif’s stance was no different than that of any other politician. Tahir-ul-Qadri, the firebrand cleric who heads the Pakistan Awami Tehreek political party from his base in Canada, had openly alleged that the Joint Investigation Team formed by the Supreme Court to probe the Sharif family’s finances was a bid to protect and not punish them. He has yet to recant that obviously false statement. Similarly, Imran Khan repeatedly claimed the government was hampering the courts and was preventing them from operating independently—openly alleging that the courts were subservient to the party in power. Senior journalist Hamid Mir even claimed in one of his columns that PPP Co-Chairman Asif Ali Zardari had told him Sharif would not face any legal action as “Takht-e-Lahore” would protect him. Is this not a clear case of disrespect for the independence of the judiciary?

The public’s response to Sharif cannot be taken out of context. In politics—especially the firebrand, rhetoric-based politicking popularized by Imran Khan—you’re either with us, or against us. Unfortunately, neither of the two major opposition parties in Pakistan, Khan’s PTI and the PPP, have managed to satisfy their constituents who continue to complain about their lack of performance.

In the PTI’s case, there are near-daily reports of corruption allegations or forgotten promises from the Khyber-Pakhtunkhwa province ruled by the party. From the northern province’s beleaguered health sector to its struggling educational facilities, Naya Pakistan’s promises of reform have largely been frittered away.

Similarly, in the Sindh province ruled by the PPP, there are indications that there has been little reform. The most recent example of the PPP’s hypocrisy in attacking the PMLN is its attempt to declare NAB illegal within Sindh. For a party that has applauded Sharif’s ouster over corruption allegations, one would think it would be more open to greater accountability—not less. The province also suffers from poor infrastructure development, most visibly in capital and economic powerhouse Karachi, which has only just begun to recover after a Rangers-led military operation that is still in force today.

There is no denying that Pakistan desperately needs stability. Corruption, ongoing security issues and a deeply seated institutional conflict that threatens to unravel the democratic process every few years beset the country. To overcome these limitations, Parliament must be accepted as the supreme institution of the land; new laws must be introduced and the Constitution amended—if needed—after public debate to ensure they are implemented; and the Constitution must be accepted as the ultimate arbiter of authority.

Sharif’s rallies have proven he realizes there is a significant gap between what his government promised and what it has delivered. His words also make it clear that he feels voters’ rights are not being met. Regardless of the reasons for this self-correction—in a country where personal fulfillment often trumps public service, his ouster leading to his ‘awakening’ is rightfully suspicious—there is no denying that it can help ensure the reform that Pakistan’s politics urgently need.

Pakistan can only prosper once the country’s political leadership starts to work for the nation and not merely for an individual or self-serving group: That is the true spirit of democracy.

It’s not clear against whom he is protesting. He alone has been disqualified by the apex Court not his Govt. His party in still in power at central and provincial level. There are many cases against Sharif family which are pending in courts from many years which he must face. Supreme Court gave him ample opportunity during over one year trial but they did not cooperate with court and did not people defence. JIT then investigated and submitted report on Panama papers.
His party represent only ten percent of total voters thus is not considered as true representative of people. Even if his party wins in Lahore in by elections on 17 Sep, it will not be considered that people’s court has disapproved apex court decision. Now best option is that his Govt should dissolve assemblies paving way for fresh elections. Fair elections it is feared cannot be held under the present Govt.