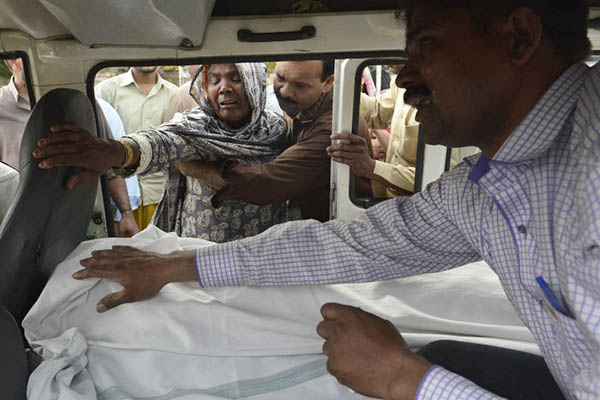 Rights groups say Aftab Masih was a juvenile when he was convicted and had been declared innocent by witnesses to the crime.

A man, who rights groups say was tortured into confessing to a murder committed more than two decades ago while still a minor, was executed on Wednesday, prison officials said.

“Aftab Bahadur Masih, a Christian man, was hanged in Kot Lakhpat prison of Lahore on Wednesday morning,” said an official at the jail on condition of anonymity. A senior prison official confirmed the hanging, which comes just days after another man condemned to death for a murder allegedly committed when he was a juvenile was granted a last-minute reprieve.

Masih, a Christian, had spent 23 years in prison after being convicted of murder in Lahore in 1992.

The Justice Project Pakistan (JPP), a law firm handling his case, and British rights group Reprieve said he was just 15 at the time of his arrest and too young to face the death penalty. They also argue he was tortured into confessing to the crimes, as were two of the witnesses against him, including his co-accused Ghulam Mustafa, who have both since retracted their statements.

In a moving essay from his condemned cell, published by Britain’s Guardian newspaper a day before his execution, Masih reflected on his life on death row, during which time he received numerous death warrants. “I doubt there is anything more dreadful than being told that you are going to die, and then sitting in a prison cell just waiting for that moment,” he wrote.

“For many years—since I was just 15 years old—I have been stranded between life and death. It has been a complete limbo, total uncertainty about the future.”

“This is a truly shameful day for Pakistan’s justice system,” Maya Foa, director of Reprieve’s death penalty team, said in a statement. “To the last, Pakistan refused even to grant his lawyers the few days needed to present evidence which would have proved his innocence. This is a travesty of justice and tragedy for all those who knew Aftab.”

Dozens of activists and relatives of Masih held a protest on Tuesday outside the Lahore Press Club demanding the execution be stopped, while church leaders had also appealed to the president for a reprieve. The Roman Catholic Bishop of Karachi, Joseph Coutts, wrote asking for a delay, while other senior church officials, including the former Bishop of Rochester in Britain, sent a separate letter appealing for clemency.

“Mr. Bahadur has now spent 23 years in prison—more than a life sentence—for a crime that the two witnesses on which his conviction rest now say he is innocent,” the letter says. “To execute Mr. Bahadur in these circumstances would be to commit a grave injustice.”

Pakistan has hanged more than 130 convicts since restarting executions in December after Taliban militants murdered more than 150 people at a school, most of them children. A moratorium on the death penalty was lifted in December, angering rights activists who claim many of the thousands now facing death have not received a fair trial.