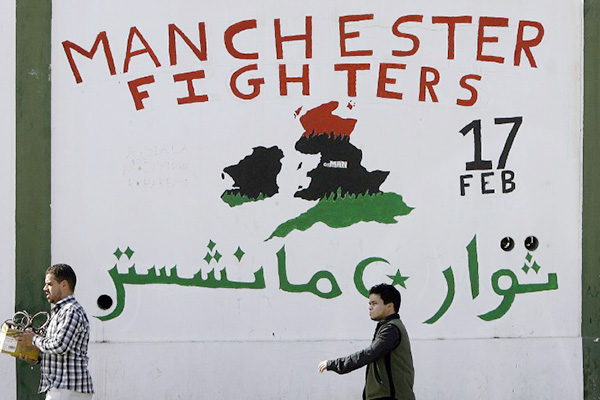 The terror attack in Manchester has thrown a spotlight on hardline Islamist exiles among opponents of former Libyan dictator Muammer Gaddafi who live in the northwestern English city, experts said.

Manchester is home to the largest cluster of Libyans in Europe, numbering 21,000 according to British media. The community became a hotbed of opposition to dictator Gaddafi, who was ousted in 2011.

It contains a diverse range of people from doctors to experienced members of the Libyan Islamic Fighting Group (LIFG), which fought alongside Al Qaeda and the Taliban in Afghanistan.

“If you were a Libyan living outside Libya, you were probably someone who was not very friendly to Gaddafi,” Raffaello Pantucci, a specialist in British suburban terrorism, told AFP. “Within that spectrum, you’d have everyone from secular nationalists to violent Islamists and jihadists,” said Pantucci, director of international security studies at the Royal United Services Institute security think-tank in London. “And because they are all fighting the same fight against the same regime, they tend to group together,” he said, describing the overlapping circles between Libyan exiles, Libyan militant Islamist groups and other Islamic extremists.

The LIFG was founded by Libyans who fought against the Soviet forces in Afghanistan and, back home, sought to overthrow Gaddafi and replace his regime with an Islamic one. LIFG has been banned in Britain since 2005, meaning it is considered a terrorist organization and it is an offense to be a member, support it or encourage support.

“In the case of the LIFG, quite a lot of them ended up coming to the U.K., where they were taking advantage of the fact that the country has a fairly open approach to political dissidents,” said Pantucci.

Monday’s deadly attack on a pop concert was perpetrated by Salman Abedi, a 22-year-old born and raised in a Libyan family in the south of the city. Abedi’s father Ramadan was a member of LIFG who found refuge in Britain before returning to fight against Gaddafi in 2011, police in Tripoli told AFP. He is now in Libyan custody following the Manchester attack.

Pantucci said there was clearly a family environment where armed struggle was “fairly normalized.”

Reda Fhelboom, a Libyan journalist who has spent many years living in Manchester, said Britain was paying an “entirely predictable” price for allowing Libyan Islamists into the country. “Everyone knows that hundreds of extremists have taken refuge in Britain,” he told AFP in Tripoli. “For several years, Britain has protected hundreds of extremists who are wanted in their own countries. The attack carried out by a Libyan was entirely predictable. I was not surprised, because every day in Manchester I see Libyan extremists from the Libyan Islamic Fighting Group and others walking around at liberty. Britain has harbored extremists and now it is paying the price.”

Detectives are trying to work out where Abedi slotted in to the picture of radicalization among the overlapping circles of allegiance in and around Manchester. Libyan refugee Abdalraouf Abdallah, 23, was jailed for five and a half years in July 2016, having been convicted of trying to help other Manchester-based extremists to join the Islamic State jihadist group. He lived in Moss Side in south Manchester, a short drive from the Abedi family home.

Meanwhile fellow Mancunian Raphael Hostey, who left Britain in 2013 and is believed to have been killed in a 2016 drone strike, is thought to have recruited several young Britons to fight for I.S.

SkyNews cited counter-terrorism sources saying they had established a “significant connection” between Hostey and Abedi.

Salah Suhbi, an M.P. in Libya who grew up in Sheffield, northern England, said Manchester Libyans had grown increasingly concerned about radicalization in the city. “They know exactly what’s happening, there’s a recruitment policy, we’ve been warning about it for years,” he told The Guardian newspaper. “People have been talking about this for the past three or four years, how ruthless they [Islamist recruiters] are. These people are recruiting from the second and third generation Libyan Brits or Arab Brits.”

Mohamed Fadil, spokesman for the Libyan community in Manchester, said they were shocked by Monday’s attack but admitted there was a problem in their midst that needed to be dealt with. “The community here, it’s all working people, like doctors and researchers, just normal people,” he told AFP. “The Libyan community is not an environment for extremism,” he insisted.

Fadil said the community met in the aftermath of the suicide attack to address the issue. “The general consensus is there is a problem. Maybe we’re not reaching out enough to our young people,” he said. “You’ll see very active steps from the community in the very near future: more activities and more involvement.”