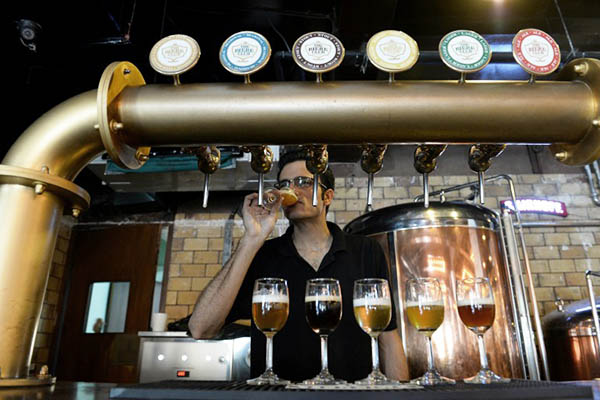 India’s version of craft brewing is seeing scores of thirsty tipplers sample everything from coconut stout to mango lager, as tastes mature in a country that has traditionally only downed strong liquor “to get a kick.”

Bangalore has more than 25 thriving brewpubs—a pub with a small brewery on the premises—while India’s other cosmopolitan cities boasting vast young populations and expanding middle classes are also catching on. “They are becoming more sophisticated in their tastes. We have young customers, middle-aged and some in their 80s with their walking sticks,” said Meenakshi Raju, co-owner of the Biere Club.

Raju and her brother decided to open a brewpub years ago after traveling in Europe and the United States where successful microbreweries “were mushrooming all over the place.” But it took another five years of working with India’s notoriously multi-layered bureaucracy before laws were drafted and passed in Karnataka state, of which international IT hub Bangalore is the capital, and its first brewpub opened in 2011.

“It was difficult mainly because it was a brand new concept that nobody knew about or understood,” Raju said.

Enjoying a lager with friends before watching a recent World Twenty20 cricket match, local engineering student Abhay Sarnaik said the craft beer was a welcome change. “We are bored of drinking bottled beer. There’s nothing wrong with Kingfisher but you can’t drink it all the time,” the 21-year-old said of the longtime local favorite, which has more than 50 percent of the country’s $3 billion annual beer market.

Indians down 425 million cases of beer alone annually and have traditionally opted for strong beer, which normally has an alcohol content of more than eight percent. It is also the world’s biggest whiskey drinking nation. “We are a big alcohol drinking country, but it’s never been about having a refreshing beverage with friends or over a meal, it’s always been about getting a high,” market expert Ankur Bisen said. “We drank strong beer to get a kick.”

But as income levels rise in India, along with overseas travel, drinkers are becoming more discerning, said Bisen, senior vice-president of retail and consumer products at consultancy Technopak in New Delhi.

Bisen said although craft beer sales were miniscule nationally, they were growing in major cities including financial capital Mumbai, and Gurgaon, a satellite city outside Delhi that is home to numerous global companies, as well as craft-brew capital Bangalore. But the hurdles facing microbrewers wanting to expand are enormous in a country whose 29 states slap a mind-boggling array of regulations and taxes on booze and its trade.

“It’s like having 29 different countries within India,” Bisen said of trying to do business nationally. “It’s also like a golden egg for some governments,” he said of revenues from tariffs on alcohol, which include the national government’s whopping 150 percent on imported spirits.

Other states in deeply religious India take a wildly different view. Prohibition has existed in Prime Minister Narendra Modi’s home of Gujarat for decades, while impoverished Bihar is rolling it out from this month. Southern Kerala, which draws tourists to its tea plantations, backwaters and sweeping coastlines, has banned alcohol sales in most hotels in a bid to combat a damaging local drinking problem. The poor mainly get around such bans by brewing their own dirt-cheap and sometimes poisonous moonshine, which kills hundreds each year.

In Bangalore, Gaurav Sikka, managing director of Arbor Brewing Company, said challenges to doing business include navigating complicated customs and other regulatory clearances for the imported hops and malt. Sikka set up his pub in 2012 in partnership with a brewer of the same name in the U.S. city of Michigan where he used to study and work.

“It’s about creating a community of people who know their brewer personally, and come together at the pub to relax and appreciate their beer.”

As crowds gathered midweek at Arbor to eat dinner and sample its eight beers, which include a Belgian-style tripel, Sikka said he was mulling expansion, with the IT hub of Hyderabad reportedly also planning to allow microbrewers. “I think we are only just testing the market, the industry is still in its infancy,” he told AFP. “Every Kingfisher drinker is not a craft beer drinker, but there is a segment that would like to upgrade. The potential is absolutely massive.”