Marching for the Missing 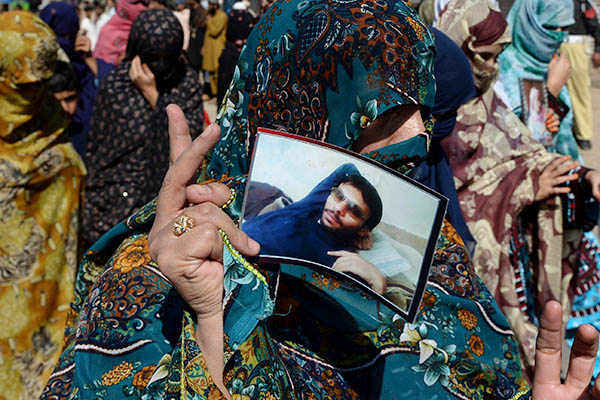 Around two dozen women have marched from Quetta to Karachi to seek justice for ‘missing persons.’

After 700 grueling kilometers of walking across scorched, arid plains, some two dozen women from Pakistan’s Balochistan province are nearing the end of a “long march” to seek justice for so-called missing persons.

For nearly a month, the women have walked for their brothers, sons, and husbands who have disappeared, allegedly at the hands of Pakistan’s security services. Tired of waiting for justice—or even news of their loved ones’ fates—the women undertook an unprecedented march from Quetta to Karachi to raise awareness of their concerns.

“There is no other way to raise our voice except this march,” said Khadija Baloch, the sister of a missing youth, her infant daughter in her lap as she looked around with piercing bright eyes.

On Thursday they reached Hub, the last town of Balochistan before they start their journey for Karachi in Sindh.

Balochistan is Pakistan’s largest but least populous province. It is also the least developed, which has exacerbated a long-running ethnic Baloch separatist movement that wants more autonomy and a greater share of its mineral wealth. The latest armed insurgency rose up in 2004 and separatist groups still regularly carry out attacks on Pakistani forces.

According to Human Rights Watch, more than 300 people have suffered this “kill and dump” fate in Balochistan since January 2011. Security services deny the allegations and say they are battling a fierce rebellion in the province, which is also an important smuggling route for heroin from Afghanistan.

The brother of Farzana Mujeeb Baloch, Zakir, was the leader of a Baloch student movement backing “freedom” for the province. In June 2009, he disappeared and the family heard nothing until 2011, when another activist arrested with him was released. “But for the last two years we have no idea where he is. I’m afraid he is a victim of ‘kill and dump,’” she said. “It is my struggle to get my brother released. I have made a thousand protests in the last four years but no one listens to me.”

The march was the idea of former banker Mama Qadeer Baloch. Some 20 to 25 women heard his call and joined the walk, some with children in their arms, their feet clad in plastic sandals ravaged by the hard road, and photos of the “disappeared” in their hands. Qadeer’s own son also went missing and was found in 2011. “One of his arms was broken, he had been shot three times, once in the head and twice in the chest. His back had been burned with hot iron rods,” he said. “In Balochistan the security agencies and the Army kidnap students and militants every day. Not a day goes by when the Baloch are not targeted.”

Last year the Supreme Court quizzed lawyers for the military’s Inter-Services Intelligence agency over missing persons in Balochistan. But for the families of the missing, the quest for answers goes on; and for those who already know the fate of their loved ones, the hope that others may have a happier outcome sustains them.

Salma Baloch, the widow of Ghulam Mohammad, an activist whose body was found dumped in 2009, said: “He has gone but there are many fellow Baloch who are in the custody of the agencies. And I want that the same thing should never happen to any other family.”