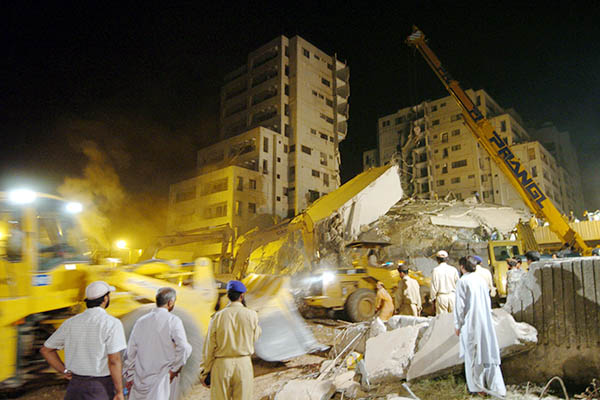 Designer of building that collapsed during 2005 earthquake was wanted under an international warrant.

A British architect of Pakistani origin wanted over the collapse of a building in Pakistan in 2005 that killed 78 people during a massive earthquake has been arrested in Greece, police said Tuesday.

Sheikh Abdul Hafeez, 71, was arrested on Sunday on the resort island of Zakynthos under an international warrant and is due to appear before prosecutors on Wednesday, a local police source said. He is accused of homicide, destruction of public assets and corruption among other allegations, according to a statement from Greek police.

According to the warrant, he was the architect of the Margalla Towers residential complex in Islamabad, which collapsed during the October 2005 quake, killing 78 people and injuring 84.

The earthquake itself, which had a magnitude of 7.6, killed about 50,000 people in Pakistan.

Greek prosecutors are expected on Wednesday to order Hafeez held in custody before going before a Greek court, which could then rule on his extradition.

His name must be Shaikh Abdul Hafeez and not Abdou Hafeez. He needs to be brought to book. Most of the cases of corruptions and negligence etc. have gone unpunished so far. This has to end.

I do understand that this incident was a very tragic one, but I’m pretty sure not only 1 person must be responsible for all of this. Surely, there must be more people involved in making a faulty building in the first place!
If he did corruptly make a faulty building, and it is proven thus, then he must be punished. However, if he’s innocent, and the building-collapse was an ‘unavoidable act’, then he should be pardoned.

We should let the legal system take care of this, before giving our own biased opinions.

The fact that he avoided the police for 8 years says pretty much!

It took a while to catch him!