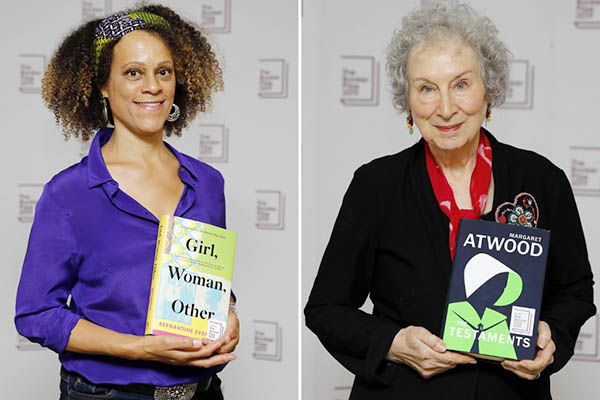 Atwood becomes the second woman to win the award twice, while Evaristo is the first black woman to be honored

Judges tore up the rule book on Monday, awarding the prestigious Booker Prize for Fiction jointly to Canadian author Margaret Atwood for The Testaments and Anglo-Nigerian author Bernardine Evaristo for Girl, Woman, Other.

Atwood becomes only the second female author to win the award twice, sharing the £50,000 prize at the 50th anniversary ceremony at London’s Guildhall.

The award has been shared twice before, in 1974 and 1997, when the rules were changed to supposedly prevent it from happening again. The 79-year-old Atwood, who wore a badge of climate activist group Extinction Rebellion, held aloft the arm of her fellow winner as they walked to the podium together.

“I’m very surprised, I would have thought I would have been too elderly,” said Atwood, who was honored for her best-selling sequel to her 1985 dystopian classic The Handmaid’s Tale. “I don’t need the attention, so I’m very glad that you’re getting some,” she said to Evaristo, joking that as “a good Canadian, we don’t do famous, we think it is in bad taste, so it would have been embarrassing if I’d been alone here.”

Evaristo responded that it was “so incredible to share this with Margaret Atwood, who is such a legend.” She added, to cheers from the audience, “I am the first black woman to win this prize.” She later told reporters she was “happy to share it, I’m a sharing person,” adding the prize money would go on paying off her mortgage.

The title of best work of English-language fiction published in the United Kingdom and Ireland has launched careers and courted controversy since its creation in 1969. Past laureates have ranged from celebrated writers such as Ian McEwan and Julian Barnes to Kazuo Ishiguro and Roddy Doyle.

Paul Beatty became the first American winner when the Booker bowed to pressure and began including authors from outside the British commonwealth, Ireland and Zimbabwe in 2013. This year’s shortlist featured six novelists—four of them women—born across four continents.

The five-judge panel included the writer-broadcaster Afua Hirsch and the British-Chinese novelist and filmmaker Xiaolu Guo.

Of Atwood’s novel, chair of judges Peter Florence said the panel “loves this examination of complicity and resilience and resistance, we love the language and the story-telling power, we love the ambition.”

Nominated for the 1986 prize, The Handmaid’s Tale became an award-winning TV series in 2017, and sales of the English-language edition have topped eight million copies worldwide.

Evaristo’s Girl, Woman, Other tells the tale of 12 women from black British families with roots across the country, Africa and the Caribbean in what judge Florence called a “polyphony.” He praised it for “giving voice to people who are not always articulated, of making the invisible visible.”

Explaining the decision to break the rules, Florence said the “situation demanded” it. “We explained this to the Booker people, they said they wouldn’t allow it,” he added. “We spent an hour discussing it… we then took another half an hour, and still came to the conclusion that… this was our decision. They agreed to respect our decision.”

Rushdie, who won the Booker Prize in 1981 for Midnight’s Children, missed out on a second award with his latest work Quichotte. The tragicomedy, inspired by the classic Don Quixote, is the story of an ageing traveling salesman who falls in love with a TV star and sets off to drive across America on a quest to prove himself worthy of her hand.

Nigerian author Chigozie Obioma made the shortlist for An Orchestra of Minorities—his second novel after The Fishermen, which was shortlisted in 2015.

Lucy Ellmann challenged judges with Ducks, Newburyport—a story made up almost entirely of one sentence that absorbs readers and is occasionally funny.

Elif Shafak, the most widely read female author in Turkey, meanwhile brought Istanbul’s underworld to life through the recollections of sex worker Tequila Leila in 10 Minutes 38 Seconds in This Strange World.