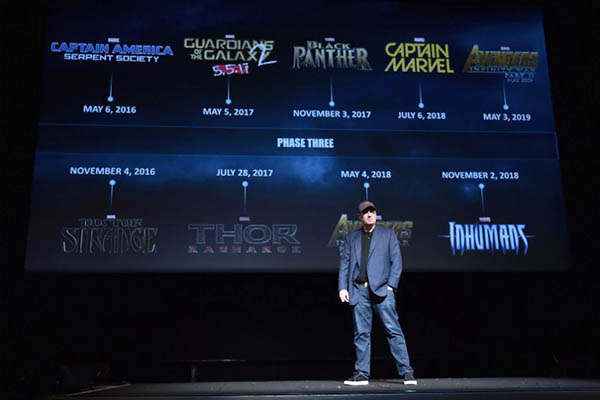 In a surprise announcement, the studio revealed there would be a new two-part Avengers sequel in 2018-2019—on top of one already scheduled for next year to follow the record-breaking 2012 original. And it confirmed a release date for the sequel to the quirky summer smash Guardians of the Galaxy, which is so far the top-grossing film of 2014.

The studio named its first African-American solo lead actor, Chadwick Boseman, who will play the title role in Black Panther, due in 2017. “I’m blessed to be part of this Marvel Universe and I look forward to making magic together,” Boseman told the crowd at an event at Hollywood’s famed El Capitan Theater, according to industry press.

The 37-year-old Boseman is best known for playing groundbreaking baseball star Jackie Robinson in 42 and soul singer James Brown in this year’s biopic Get On Up. The character will be introduced in Captain America: Civil War in 2016 before a solo outing the following year, Marvel said.

Casting was not revealed for Captain Marvel, the studio’s first solo female superhero movie. The studio also did not name the actor tapped to play Doctor Strange. British actor Benedict Cumberbatch has been widely rumored to be tipped for the role.

The first Avengers movie and last year’s Iron Man 3 are among the top five grossing films ever, together earning more than $2.7 billion worldwide to date, according to Marvel. The Avengers—in which a band of superheroes helps save Earth from mythical prankster Loki and an alien army—opened in North America in May 2012 with a staggering $207.4 million in ticket sales—the biggest U.S. debut of all time. Avatar remains the biggest grossing film of all time worldwide, with some $2.8 billion in takings, followed by Titanic on $2.2 billion and The Avengers on $1.5 billion, according to Box Office Mojo. It remains to be seen if any of Marvel’s new offerings could top James Cameron’s 2009 spectacular.

“Could Avatar be dethroned by one of these titles? Doubtful,” said Bock. “But cracking the billion dollar mark is nearly guaranteed for half of these films. And that’s no chump change,” he added.

Below is a list of the nine Marvel movies announced on Tuesday, in chronological order based on release date: