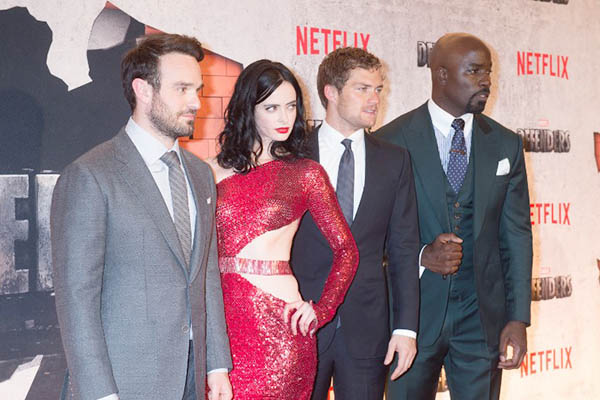 Riding the slipstream of the Avengers, X-Men and Fantastic Four, The Defenders is promising to bring a more tortured and cerebral superhero vibe to Netflix’s ever-growing repertoire of Marvel series.

The show unites for the first time the titular characters from the streaming service’s four standalone Marvel series—Luke Cage, Iron Fist, Jessica Jones and Daredevil—when it premieres on Friday. They join forces to battle a threat to their hometown of New York in the shape of the malign Alexandra (Sigourney Weaver), who seems to be linked to the shady multinational conglomerate known as The Hand. But the group starts out as a tenuous alliance between four very different characters, all of whom are used to going it alone and have little time for the concept of team spirit.

The group’s first meeting doesn’t augur well for things to come, with Luke Cage and Danny Rand—alias the Iron Fist—even coming to blows.

Actress Krysten Ritter says Jones, a young woman with a tortured past, a penchant for booze and a colorful vocabulary, is “very reluctant” in particular to be part of a team. “Everybody’s so used to working on their own, they all feel that their way is the best way,” said Mike Colter, who plays Cage, at a roundtable with journalists in New York. “So sometimes each one of us gets really determined to force our way of doing things because it’s the only way we know.”

What persuades the four heroes to band together, says Colter, has to be something really big—a danger to “a larger number of people than just the people of Harlem” that threatens the whole city.

Filmed entirely in the Big Apple, The Defenders is steeped in the culture and custom of New York, a real-life backdrop that feels more organic than the fictional cities of Gotham or Metropolis. “Historically, some people shot other places for New York. To some degree it’s effective when you deal with people that have never been to New York,” said Colter, 40. “But if you’ve been to New York, you immediately can tell. New York is very important because I think it symbolizes a sort of freedom to the world.”

The Defenders is distinguished from many superhero series and movies in the time it takes to explore the internal conflicts that haunt each of its heroes. Jessica Jones, in particular, is struggling to find her place in the world, scarred by “traumas and injustices” after losing her parents in a car accident, says Ritter, 35.

When they are brought together, each of the four Defenders is in transition, without a superhero costume, in search of an identity. “I built [Jones] from the ground up, based on her back story, on what she’s been through in her life and how she views the world—with a little sense of humor on top of it to lighten things up,” said Ritter. She added that she sees Jones as “a character who has super powers” rather than as a superhero. “For me, it’s character first, drama first. I just approach it like I would any other acting part.”