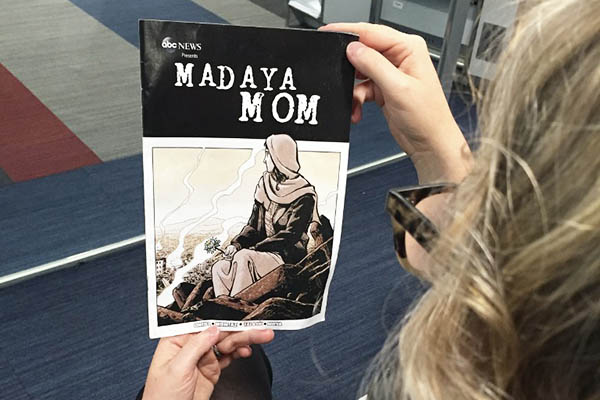 Besieged by the Syrian government for two years, the city of Madaya has had little contact with the outside world—barely reachable by aid convoys, let alone video journalists. So ABC News and Marvel Comics, known for its muscular superheroes, teamed up find another way to help the world see the devastating reality of life under siege.

Journalists at ABC had been in contact with a woman living in Madaya—a city home to some 40,000 people near the border with Lebanon—who chronicled in a series of blog posts her fight to survive the harsh conditions brought on by the Syria’s civil war, now in its sixth year.

The two Disney-owned companies created a free, digital comic based on the anonymous dispatches by the young mother of five—a way to try and demonstrate the horrors their cameras could not access.

The illustrated panels are far less bloody than they are heartbreaking. Combined with the powerful words of the mother—kept anonymous to protect her family’s safety—they speak to the severe hardships trapped families are enduring.

Since Madaya came under total siege in mid-2015, more than 60 victims have died of famine and malnutrition. “Our bodies are no longer used to eating,” reads one panel. “My children are hungry but are getting sick, severe stomach pains from the food because their bodies aren’t able to digest and absorb the food because they were hungry for so long.”

Artist Dalibor Talajic said he made a conscious effort to avoid straying into the sensational. “I didn’t want to do a war comic,” said the Croatian artist—who lived through Yugoslavia’s breakup in 1991. “I wanted to make a comic with a civilian point of view, where you’re really powerless. You can’t do anything. You’re just waiting for it to pass or for you to die.”

Before now Talajic was best known for his work on Deadpool, a comic about antiheroes that were featured in a film of the same name earlier this year.

The illustrator said he is “not a typical Marvel artist where everything must be larger than life,” preferring instead to stay anchored in reality. “I always try to keep things more familiar, more grounded, more probable.”

But attempting to convey the grim daily life of besieged Syrians without sensationalizing was no easy task. “It was challenging,” Talajic said, noting that he never saw photos of the young mother or the family. “It’s like blade running the thin line of being exploitive of someone’s hardship.”

The brutal story of daily life under siege is occasionally broken up with small bright moments. “It is a mother, but it is every mother,” Talajic said. “It is a family, but it’s every family.”

ABC did manage to deliver some of Talajic’s images to the mother: “she found that he really nailed the features of the people, the ambiance, the town,” ABC News Producer Rym Momtaz said. “If she ever gets out,” artist Talajic said, “the pictures will go to her.”