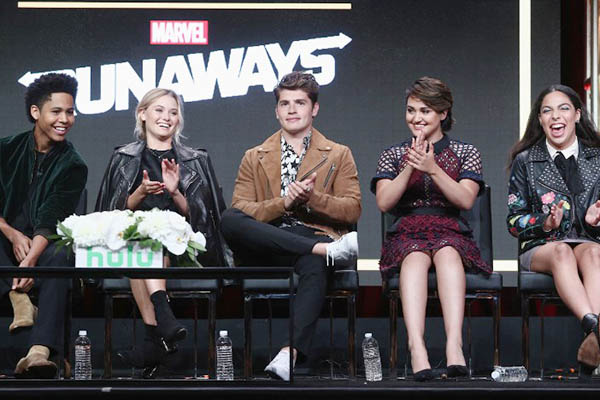 Created by ‘The O.C.’ showrunners, the upcoming show is more directly aimed at the teen market

As Marvel’s relentlessly expanding superhero factory dominates the worldwide box office, the Disney-owned studio has been staging a less heralded but equally emphatic TV takeover. The fall season has already seen the debuts of Netflix’s The Defenders and, on Friday, The Punisher, as well as one show all involved might like to forget—ABC’s critical and ratings flop Inhumans.

In the slipstream of this glut of small screen superheroism comes Runaways, Hulu’s first dip into the Marvel Cinematic Universe. Along with Freeform’s upcoming Cloak and Dagger and the as yet homeless New Warriors, it is part of a trio of Marvel properties aimed more directly at the teen market than the nine series already shown on Netflix and ABC.

Runaways stars a group of relatively new young actors as a ragtag bunch of teenagers from diverse backgrounds who unite against their own parents, evil superheroes who form a criminal society known as The Pride. The task of creating the show—based on a cult comic book series of the same name—fell to long-time writing partners Josh Schwartz and Stephanie Savage, the team behind hit teen dramas The O.C. and Gossip Girl.

The showrunners and Marvel Television chief Jeph Loeb told journalists on a recent set visit in Tarzana, southern California, that the studio thought of Runaways as “The O.C. in the Marvel universe.”

“The story is about family, it’s about that moment where a kid realizes that their parents are fallible, that they are imperfect, that they may not be who they necessarily thought they were growing up,” Schwartz told AFP. That experience, he said, is something ordinary kids all over the world go through—even with run-of-the-mill parents who aren’t criminal geniuses with superpowers.

“That central premise of the book—every teenager thinks their parents are evil, what if they actually were?—is delicious and fun, but there’s also a real truth to it that transcends genre,” he added.

Originally conceived as a movie, Runaways was ordered as a TV pilot by Hulu in August last year, and rolls out its first three of 10 episodes on Tuesday.

Hulu has around 32 million individual users, a quarter of the number rival streamer Netflix attracts and less than half the Amazon figure. But it has the wind in its sails following critical acclaim and eight Emmy Awards for its dystopian sci-fi series The Handmaid’s Tale.

The Runaways include a highly intelligent jock, a powerful witch, a flying alien, a character with a psychic link to a dinosaur and, inevitably, another with superhuman strength. As with many Marvel shows, the writers take their time establishing their characters’ backstories, concentrating on typical teen drama tropes such as cyber bullying and underage drinking.

Part coming-of-age story, part family drama, it goes long stretches with the superhero element buried somewhere in the background, not showing anyone so much as bend a spoon. The teens—played by Rhenzy Feliz, Gregg Sulkin, Virginia Gardner, Allegra Acosta, Ariela Barer and Lyrica Okano—come across more as a millennial The Breakfast Club than an Avengers tribute act.

While they are all fresh faces, the adult cast features some old hands, not least James Marsters—platinum blond vampire Spike in Buffy the Vampire Slayer—as evil genius Victor Stein. His wife Janet is played by TV veteran Ever Carradine — last seen as the sinister wife of one of the commanders in The Handmaid’s Tale.

“It’s about questioning parents that maybe you’ve idolized, questioning close friendships that you’ve always thought were rock solid and then you learn something about that person that changes everything,” she told AFP. “It’s… questioning the truth, questioning and sticking to your own personal judgment.”

Early reaction bodes well, with reviews website Rotten Tomatoes reporting an 86 percent approval rating with an average of 7.4/10 based on 21 reviews. “Runaways might not get as much hype as its cousins at Netflix and on the big screen, but it’s a solid addition to Hulu’s now Emmy-winning original lineup and the Marvel live-action universe,” said Chelsea Tatham of the Tampa Bay Times.