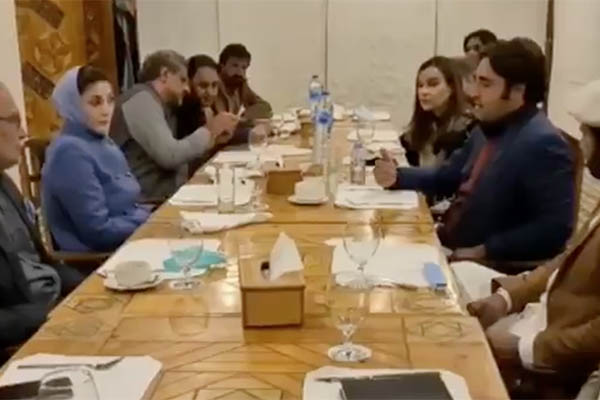 Pakistan Peoples Party Chairperson Bilawal Bhutto-Zardari and Pakistan Muslim League (Nawaz) Vice President Maryam Nawaz on Wednesday met in Gilgit, where they have both been campaigning for the Gilgit-Baltistan elections on behalf of their respective parties.

Organized at the behest of Maryam, the meeting commenced with a brief chat over tea, before continuing in a nearby garden where the two walked for a few minutes and discussed Pakistan’s prevailing political situation. According to sources familiar with the meeting, they also discussed the country’s future, as well as the upcoming Gilgit-Baltistan elections, set to take place on Nov. 15.

The sources said that Bilawal and Maryam pledged to respect each other’s political narrative, and also agreed to strengthen the united opposition’s Pakistan Democratic Movement and its shared narrative of civilian supremacy.

After their one-on-one meeting, both leaders also conducted meetings with their delegations. The sources said that both parties agreed to evolve a joint response if there were any rigging in the Gilgit-Baltistan polls.

In a joint declaration issued after the delegation-level meeting, both parties warned against any attempt to rig the upcoming polls. They vowed to continue supporting the PDM’s narrative and stressed that their movement would continue until the incumbent Pakistan Tehreek-e-Insaf government had been ousted from power.

While the PPP and PMLN are collaborating under the umbrella of the PDM, they are rivals in the Gilgit-Baltistan elections, with both urging the populace to vote them into power. Recent popularity polls have suggested the PTI currently enjoys the support of the majority, with the PPP trailing in second and PMLN emerging in third place.