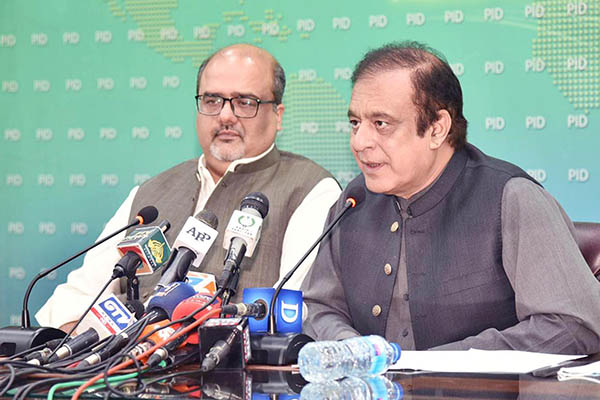 Addressing a press conference in Islamabad Akbar said that Maryam’s comments on her uncle preferring politics of reconciliation, had destroyed his political future. “Your [Maryam] speech was a speech of victory,” Akbar claimed, implying she was in favor of Shahbaz being imprisoned.

Responding to Maryam’s allegations of “government-NAB nexus,” Akbar claimed the opposition had no issues when court judgments went in their favor. “But when they are given against them, they [rulings] are wrong,” he said.

Referring to the upcoming elections in Gilgit-Baltistan elections, he asked how many times Shahbaz had visited the area in the last six months. “PMLN is a Punjab-based party, they do not have any concerns about GB,” he claimed.

He also reiterated an oft-repeated jibe about Nawaz Sharif’s businesses and children being based abroad—perhaps forgetting that the prime minister’s family is also based in London.

In a broadside directed at PMLN spokesperson Marriyum Auranghzeb, Akbar claimed she was a “rented” spokesperson, adding she could face contempt of court charges for criticizing the cancellation of Shahbaz’s bail.

The accountability czar alleged that the PMLN president had accumulated assets beyond means, adding that the court had allowed his arrest because it was merited.

Akbar also rejected the notion that the case was targeting Shahbaz’s children, claiming it was focused on the opposition leader’s “gang.” “You [Shahbaz] transferred the money back to Pakistan after sending it abroad to whiten it,” he said, claiming the wealth was all earned through money-laundering.

The P.M.’s aide said Shahbaz’s employees—some of whom have been accused of possessing accounts with millions of rupees—have all confessed that they had no connection to the benami companies. “Shahbaz Sharif, you are guilty of doing corruption worth billions of rupees,” he claimed.

Information Minister Shibli Faraz, meanwhile, claimed Shahbaz Sharif was arrested because he could not satisfy the court about his assets and money laundering. “If they [Sharifs] have made money through legal and just means there is nothing wrong but they should give their money trail,” he said and dismissed comparisons between Prime Minister Imran Khan’s foreign assets and the Sharifs.

He said the courts had declared Imran Khan sadiq (truthful) and ameen (righteous), reiterating the opposition only wanted to oust him so it could come into power again.