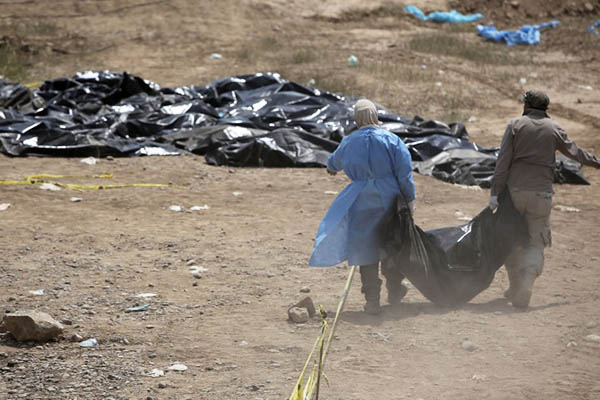 A mass grave believed to hold the remains of dozens of Yazidi women executed by the Islamic State group was found Saturday in northern Iraq, officials said.

The grave, which has not yet been excavated, is located on the edge of the town of Sinjar, which was captured from I.S. this week in an operation led by Kurdish security forces and backed by U.S.-led airstrikes.

The area is infamous for a brutal I.S. campaign of massacres, enslavement and rape against Yazidis, a minority group whose faith the jihadists consider heretical. The grave contains the bodies of some 78 women aged between 40 to around 80, according to younger women who had been enslaved by I.S., witnessed the executions and later escaped, said Miyasir Hajji, a Sinjar council member.

“It seems the [I.S.] terrorist members only wanted young girls to enslave,” Hajji said, a reference to jihadists using women as sex slaves who can be bought and sold.

Mahma Khalil, the local official responsible for the Sinjar area, confirmed that the grave had been found, and said it is believed to contain some 80 victims.

I.S. overran Sinjar in August last year, forcing thousands of Yazidis to flee to a mountain overlooking the town, where they were trapped by the jihadists. The United Nations has described the attack on the Yazidis as a possible genocide.

Aiding the Yazidis was one of Washington’s main justifications for starting its air campaign against the jihadists last year.