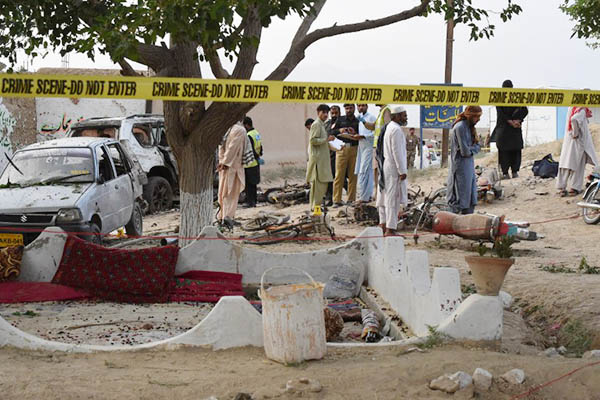 A suicide bomb blast that targeted the convoy of a senator in Balochistan on Friday killed at least 26 people and wounded more than 40 others, according to officials.

The attack in Mastung district struck a vehicle carrying the deputy chairman of Pakistan’s Upper House Maulana Abdul Ghafoor Haideri. It was later claimed by the Islamic State group, which has been making inroads in the country through alliances with local militant outfits.

“I am alive, Allah has saved my life, it was a sudden blast, broken pieces of the windscreen hit me, I am injured but safe. The driver and other people sitting next to me were badly injured,” Haideri said on private TV channel SAMAA.

Survivors, several covered in blood, were picking up body parts that lay scattered in the road among vehicles twisted by the blast. Paramilitary troops and a bomb disposal squad were deployed outside a nearby madrassa where the convoy had been headed for a graduation ceremony.

Pakistani, Afghan, Chinese and Bangladeshi flags—the nationalities of students at the seminary—were on display ahead of the ceremony.

“The death toll has reached 25 and [there are] 35 injured,” said Sher Ahmed Satakzai, Mastung district health officer. He warned that the death toll could rise since several of the injured are in critical condition.

A local government official and a senior police official confirmed to AFP that it was a suicide bombing and the attacker came riding a motorcycle and blew himself up close to Haideri’s vehicle. Islamic State claimed responsibility via its Amaq news agency.

“A martyrdom-seeker from the Islamic State targeted with his explosive vest a convoy of the deputy chairman of the Pakistan Senate, Abdul Ghafoor Haideri, in Mastung district, south of the city of Quetta,” the group said.

Haideri is a top official of Jamiat Ulema-e-Islam (Fazl), one of the country’s most powerful religious political parties. JUIF has been targeted by the Pakistani Taliban in the past—even though the party leaders have acted as negotiators between the militants and Pakistan government on several occasions.

Pakistan has been battling Islamist and nationalist insurgencies in mineral-rich Balochistan since 2004, with hundreds of soldiers and militants killed in the fighting. Bordering Iran and Afghanistan, it is the largest of Pakistan’s four provinces, but its roughly seven million inhabitants have long complained they do not receive a fair share of its gas and mineral wealth.

A greater push towards peace and development by Pakistani authorities has reduced the violence considerably in recent years. The push includes starting work on a massive Chinese infrastructure project—the China-Pakistan Economic Corridor—which gives Beijing a route to the Arabian Sea through Balochistan’s deep sea port of Gwadar.