Home Sports Match Made in Eden

Match Made in Eden 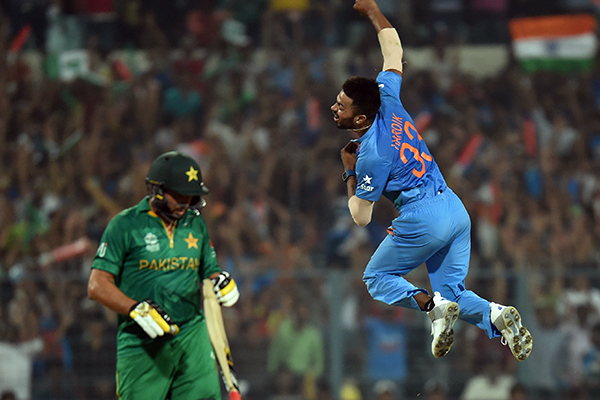 It took 22 hours to reach Kolkata from Islamabad. Was it worth the odyssey just to witness India defeat Pakistan on March 19 in their ICC World Twenty20 cricket match? Given the odds of India triumphing, it was more important than ever to be there for Team Pakistan.

The morning of the match had all been wind, lightning and thunder. I walked to the venue, Eden Gardens, ahead of the match. The excitement was palpable. The people queued up for tickets were patient and courteous, but jazzed up. As expected, the match was sold out, and tickets were being scalped at three times the sticker price. The Indian media was out in full force, too. ‘India will win,’ was their uniform prediction as they reported live.

There were several young Indians, like Mohammad Afaq, who told me they were rooting for Pakistan to win. His sentiment was sweet and innocent, but perhaps unusual for an Indian. But we all live with multiple identities, and that’s okay. I got lost on my way back to the hotel. An elderly man was helpful and, during our short conversation, told me that Indians are split between supporting India and Pakistan because “both teams play well.” That may not be true, but it was nice of him to say that. “For us, this is the final,” he added. I didn’t ask him which team he would be cheering on.

Back at the venue for the match, the stadium had the air of a final. The feisty, playful nationalism was electric. After some anxious moments, the weather became a settled affair, and the pitch and outfield had been heavily secured against the rain. By late afternoon, we got word that our women’s cricket team had sent India packing at only 97 runs. Could this impel our men’s team to victory? I went to the general stands with another Pakistani woman, someone I had never met before, and we proudly sat amid the roaring Indians with our huge, wrinkled Pakistan flag, matching the Indians’ chants with our own.

Then Bollywood legend Amitabh Bachchan and Pakistani singer Shafqat Amanat Ali arrived. Ali sang Pakistan’s national anthem, and my new friend and I rose from our seats and sang along with joy and pride. The tens of thousands of Indians in the stadium were respectful of our anthem—some even hummed along.

And then it all began. Sharjeel and Shehzad came to open Pakistan’s account. The wicket was spinning and the Indian pacers and spinners initially appeared unplayable. We only had 18 overs to score. By 42 runs, the runs were only trickling in. The Indians were ecstatic about the brilliant fielding and balling from Dhoni’s team. Our batsmen hardly settled down and the overs kept slipping by. Dhoni’s boys played like their lives depended on it. They sprinted dives and did not let a run go easily. Pakistani batsmen barely managed to tackle the deadly turn of the ball on the post-rain wicket. Afridi’s batting was usual, as was his inexplicable decision to bring Tauseef at No. 8. Only Shoaib looked comfortable. With a total of 124 runs, Pakistan’s bowlers were again given an impossible task. Our two-person, Pakistan-cheering squad slumped.

The Indians’ jeering slogans were deafening. We asked the Indian youngsters to at least appreciate our batsmen’s boundaries. That didn’t happen, but they did offer us water and snacks. “We have never won against Pakistan at Eden Gardens,” one of them said to buck us up.

Our innings were no wining affair. Indians around us said it’s a good score on this wicket. Of course, they knew better. Proudly, an Indian told me, “This is Dhoni’s own team, these are his boys.” So no in-team fights. How lucky. We folded our flag, our smiles and our enthusiasm and left the stands for a breather. I wondered what Afridi was planning to fight back. The bowlers have to defend a pretty low score and the pitch was great for spinners. The Pakistan coach and captain have gone in with five pacers and had dropped our star spinner Nawaz.

Imran Khan, who was there in Kolkata, never lost hope. He hoped that the two quick Sami wickets would be followed by greater pressure on the Indian batsmen by using fiery pacer Amir. Afridi had other plans, mostly devoid of any intelligent planning. His walk and his gestures on the field were a giveaway. He decided to bowl himself, and his wavering line and length were a treat for the Indians. Wahab was also a risky introduction. After the first nine overs, an Indian victory was reasonably certain.

Pakistan’s captaincy, its batting and fielding were all tepid. Such teams don’t win, and didn’t. Until the Pakistan Cricket Board wakes up and stops repeating its mistakes, winning is going to be a long shot. But despite the outcome, the long hours it took to get to Kolkata were totally worth it.

Zehra is a columnist and TV talk-show host.